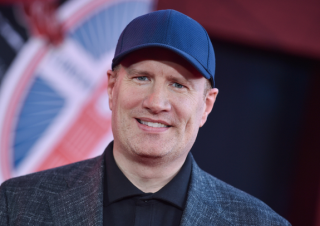 According to the Hollywood trade, Feige had discussed a possible "Star Wars" project in a late summer meeting with Kennedy and Walt Disney Studios co-chairmen Alan Horn and Alan Bergman. Horn has seemingly corroborated the report in a response to THR.

"We are excited about the projects Kathy and the Lucasfilm team are working on, not only in terms of 'Star Wars' but also 'Indiana Jones' and reaching into other parts of the company including Children of Blood and Bone with Emma Watts and Fox," said Horn. "With the close of the Skywalker Saga, Kathy is pursuing a new era in 'Star Wars' storytelling, and knowing what a die-hard fan Kevin is, it made sense for these two extraordinary producers to work on a 'Star Wars' film together."

While citing conflicting sources who believe this will lead to a larger role for Feige within Lucasfilm and others who believe its merely reflective of a passion project for the Marvel Studios head, THR cites "a top Disney source" that says Kennedy's role at Lucasfilm — which she's held since 2012 when Disney acquired the studio — is secure.

Another source they cite as "knowledgeable" claims Feige told a "major actor that there's a specific role he would like that person to play if and when he makes the movie."

The news puts the Marvel Studios-Sony split over Spider-Man in a new light. In a statement last month regarding the news that Feige would not continue as executive producer of future Spider-Man films, Sony cited then-unspecified new duties Feige assumed on Disney properties that 'included' the new MCU films and streaming shows Marvel Studios announced at the San Diego Comic-Con and then D23.

"We hope this might change in the future, but understand that the many new responsibilities that Disney has given him — including all their newly added Marvel properties — do not allow time for him to work on IP they do not own," Sony tweeted.

The addition of Feige — undisputedly the hottest producing hand in tentpole studio films — to the Star Wars team is possibly reflective of an uncertain future for the franchise following December finale of the nine-film "Skywalker Saga" in "The Rise of Skywalker."

Given the lukewarm response to 2018's "Solo: A Star Wars Story" along with the high creative churn rate on the five Disney-Lucasfilm productions, both the steady hand and instant credibility Feige brings to the table could only be an asset to the franchise.

"The Last Jedi's" Rian Johnson and "Game of Thrones'" D.B. Weiss and David Benioff are working on their own series of films, respectively, and MCU actor, director and producer Jon Favreau's live-action series The Mandalorian is set to help launch the Disney+ streaming service on Nov. 12.

Look for more on this developing story this week …