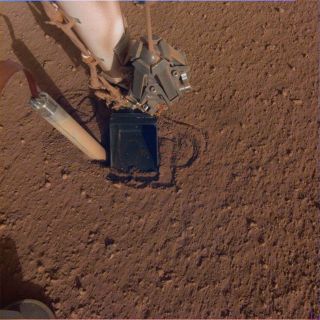 In this image from Oct. 26, 2019, the InSight Mars lander's heat probe, or "mole," is seen after backing about halfway out of the hole it had burrowed.
(Image: © NASA/JPL-Caltech)

A metal mole's up-and-down saga on Mars has taken yet another turn.

The burrowing heat probe aboard NASA's InSight Mars lander was originally supposed to dig 10 to 16 feet (3 to 5 meters) beneath the planet's red dirt, using a self-hammering tool called "the mole." Shortly after deploying onto the Martian surface in February, however, the instrument became stuck about 1 foot (0.3 m) down.

Earlier this month, InSight team members announced that they'd managed to get the mole moving again by pinning it down with the lander's robotic arm. The breakthrough suggested that the digger had previously lost friction with the dirt, perhaps as a consequence of Mars soil's weird properties, rather than having run up against a big buried rock.

But that downward progress was short-lived. The mole has backed about halfway out of its burrow, mission team members announced yesterday (Oct. 27).

"Preliminary assessments point to unusual soil conditions on the Red Planet. The international mission team is developing the next steps to get it buried again," NASA officials wrote in an update yesterday.

"The next step is determining how safe it is to move InSight's robotic arm away from the mole to better assess the situation," they added. "The team continues to look at the data and will formulate a plan in the next few days."

The heat probe, officially called the Heat Flow and Physical Properties Package (HP3), was provided by the German Aerospace Center (known by its German acronym, DLR). HP3 is one of InSight's two main science instruments. The other is a suite of supersensitive seismometers that were provided by the French space agency CNES and its partners, which are measuring and characterizing marsquakes.

The data gathered by InSight, which touched down near the Martian equator in November 2018, will help scientists to construct a detailed 3D map of the Red Planet's interior. This information, in turn, should reveal a great deal about the formation and evolution of rocky planets in general, NASA officials have said.

The seismometers have detected 150 events to date, 23 of which have already been confirmed as marsquakes, InSight project manager Tom Hoffman, of NASA's Jet Propulsion Laboratory in Pasadena, California said earlier this month during a presentation at the 22nd Annual International Mars Society Convention in Los Angeles.

Remember that, even though the international team will continue to do their best to get this mole into the ground, the mole working is not a so-called Level 1 for mission success.October 27, 2019

"Remember that, even though the international team will continue to do their best to get this mole into the ground, the mole working is not a so-called Level 1 for mission success," he added in another tweet.