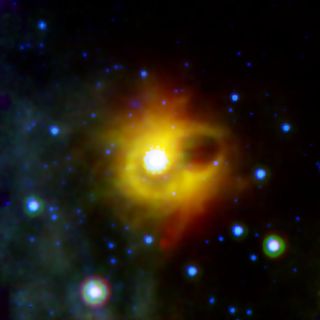 Astronomers are investigating a radio-burst emission from a magnetar that reactivated last year, and have so far found that its burst activity is both strong and narrow. They suspect that further study of the burst could reveal new information about fast radio bursts.

The team, led by Yogesh Maan of the Netherlands Institute for Radio Astronomy, found that radio bursts from this magnetar are between 1.0 and 4.0 ms wide at 650 megahertz (MHz). They also found that this width narrows at 1,360 MHz. The team also observed that the magnetar's magnitude of brightness has rapidly decreased since the burst was detected in 2018. So not only is the recent burst activity of XTE J1810−197 relatively narrow, it is also relatively strong, the researchers found.

"The bursts exhibit spectral structures which cannot be explained by interstellar propagation effects," the team of astronomers wrote in the paper describing their findings, which was published Aug. 12 in the preprint journal arXiv, stating that the bursts from XTE J1810−197 don't disseminate in space as expected.

"While the spectral structures are particularly noticeable in the early phases of the outburst, these seem to be less prominent as well as less frequent in the later phases, suggesting an evolution of the underlying cause of these spectral structures.

The team plans to investigate the emission from XTE J1810−197 further at higher frequencies. They hope that this will answer their question of whether the magnetar is somehow linked to repeating fast radio bursts.