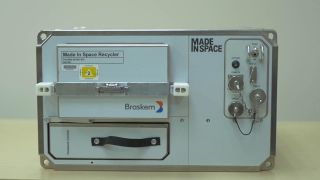 Made in Space’s Plastic Recycler hardware, which is scheduled to launch toward the International Space Station aboard a Northrop Grumman Cygnus spacecraft on Nov. 2, 2019.
(Image: © Made In Space)

The commercial 3D printer aboard the International Space Station (ISS) is about to get a bit more sustainable.

California-based company Made In Space is set to launch its Plastic Recycler toward the orbiting lab next Saturday (Nov. 2) aboard Northrop Grumman's robotic Cygnus cargo spacecraft. The recycler will process waste plastic into feedstock for Made In Space's Additive Manufacturing Facility (AMF), a 3D printer that's available for commercial use.

"The Recycler will complete the plastic sustainability life cycle on orbit by providing astronauts the ability to convert plastic packaging and trash as well as objects previously fabricated by the 3D printer into feedstock to be reused by the printer," Made In Space representatives wrote in a description of the machine.

"The invention will improve the autonomy and sustainability of long-duration space missions, while also helping to reduce the cost and weight of payloads carried from Earth," the representatives added.

Made In Space first launched a 3D printer to the ISS in 2014, as part of a partnership with NASA. The space agency is now in charge of that pioneering machine, but Made In Space retained ownership of the AMF, which reached orbit in 2016.

The company has also manufactured the valuable optical fiber ZBLAN aboard the ISS multiple times using a microwave-size machine that has gone up and down aboard SpaceX's Dragon cargo capsule. ZBLAN has the potential to be far superior to traditional silica-based optical fiber but is difficult to produce on Earth, Made In Space representatives have said. The company believes that making ZBLAN in orbit could help kick-start the off-Earth manufacturing economy.

The early ZBLAN results have been promising, and the company plans to launch a slightly bigger ZBLAN-producing machine in the next year or so, Made In Space President and CEO Andrew Rush said during a press event with NASA Administrator Jim Bridenstine in late August.

The company will send other gear up soon as well, if all goes according to plan. NASA recently awarded Made In Space $73.7 million to launch the first test mission of Archinaut, a spacecraft equipped with robotic arms and a 3D printer. That printer is designed to augment and repair existing satellites as well as build big structures in orbit. This Archinaut One mission could lift off as early as 2022, aboard a Rocket Lab Electron booster.

The Plastic Recycler will share a ride with lots of other science gear next weekend. Also flying aboard the Cygnus, for example, are a zero-g oven that will investigate how heat transfer and baking work in microgravity, along with a prototype vest designed to help shield astronauts from space radiation. The spacecraft will also transport components that will extend the operational life of the Alpha Magnetic Spectrometer-02 instrument, which has been hunting for evidence of mysterious dark matter from the orbiting lab's exterior since 2011.

Northrop Grumman and SpaceX both hold ISS resupply contracts with NASA. Next weekend's launch will kick off Cygnus' 12th trip to the orbiting lab under Northrop Grumman's deal.