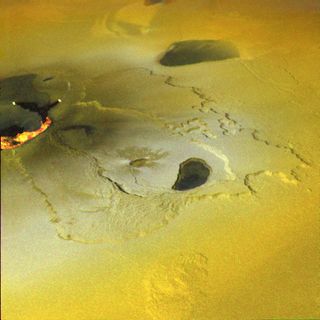 The most volcanic body in the solar system may not boast a magma ocean beneath its surface after all.

Scientists had thought that magnetic field variations around Jupiter's moon Io, as measured years ago by NASA's Galileo spacecraft, resulted from interactions between Io's magma ocean and the gas giant's magnetic field.

But recent research suggests that the same variations could be caused by interactions between Jupiter's magnetic field and Io's volcano-fed atmosphere. A magma ocean on Io, while not ruled out, is therefore not required, the study reports.

As king of the planets, Jupiter boasts the solar system's largest magnetosphere, the envelope of charged plasma around an object where its magnetic field dominates. Most of Jupiter's moons, including Io, are embedded in the magnetosphere, and their atmospheres and magnetic fields can interact with the larger structure.

Galileo made six flybys of Io between 1999 and 2002 while exploring the Jovian system. Those flybys revealed the moon's interaction with the planet's magnetic field and, along with its extensive volcanism, led researchers to conclude that Io concealed a magma ocean beneath its surface.

But ongoing studies of the moon's atmosphere have allowed a separate team of scientists to take new stock of  Galileo's data. The recent research suggests that the volcanically modified atmosphere alone could be responsible for the changes seen by Galileo.

The original research, published in 2011, assumed a much thinner atmosphere than subsequent observations by a variety of instruments revealed.

"We considered a thicker atmosphere with asymmetries and find that a magnetic field from a magma ocean is not needed to explain the same data," Aljona Blocker, a researcher at Germany's University of Cologne and the lead author on the study, told Space.com by email.

With more than 150 known volcanic hotspots, Io easily qualifies as the most volcanic body in the solar system. Gas and dust plumes from 16 different volcanic centers have been observed climbing up to an altitude of 250 miles (400 kilometers), creating a patchy, sulfur-rich atmosphere. When Io travels through Jupiter's shadow, the atmosphere collapses into frost, evaporating back into gas once the moon emerges.

Since the conclusion of the Galileo mission, researchers have used Earth- and space-based instruments to probe Io's atmosphere. These observations revealed how the density of the atmosphere changes based on its location over the moon, with the atmosphere thinner over the poles than at the equator.

Unlike Earth, whose spinning iron core generates a planet-wide magnetic field, Io has no magnetic field of its own. Instead, it is shrouded beneath Jupiter's massive magnetosphere.

"Io would not have any magnetic fields if it was taken out of the magnetosphere of Jupiter and put in empty space," Blocker said.

Blocker and her colleagues modeled interactions between Io's atmosphere to determine how the air affects the surrounding Jovian magnetosphere. They primarily probed how the plumes created by the volcanoes Tvashtar and Pele affect the plasma environment of the moon. Tvashtar is located near the northern pole of Io, while Pele lies closer to the equator. The two lie on nearly opposite sides of the moon, so that when one sits in daylight, the other is in darkness.

The researchers found that the changes generated by the atmosphere's interaction with the plasma are sufficient to explain the measurements made by Galileo. Polar plumes had a stronger effect on the magnetic field surrounding the moon, while plumes near the equator caused much weaker changes. They also determined that Io's ionosphere — the upper atmosphere where charged particles tend to live — changes, due to volcanic activity. Such changes alone are sufficient to explain Galileo's observations, the team concluded

This result matches with the team's 2017 discovery that Io's auroral spots are inconsistent with a magma ocean.

It's still possible that a magma ocean flows beneath Io's surface; the new findings simply rule it out as a necessity. Further geophysical observations that do not rely on measurements of the charge environment could help reveal the presence of a magma ocean, if one exists, Blocker said.

"We require more measurements from Io's environment from future spacecraft missions to constrain Io's interior structure and … atmosphere," she said.

The results were published last fall in the Journal of Geophysical Research: Space Physics.