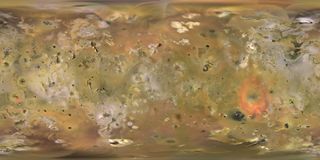 This first-ever complete map of Jupiter's volcanic moon Io released on March 19, 2012, was created using data and images from NASA's Galileo spacecraft, (which studied Jupiter and its moons between 1995 and 2003) and the Voyager mission in 1979. Color views from Galileo were superimposed on higher-resolution monochrome images.
(Image: © USGS)

For the first time, scientists have created a global geologic map of Jupiter's moon Io, the most volcanically active object in the solar system.

The map, which was published this week by the U.S. Geological Survey (USGS), shines a light on Io, the fourth-largest satellite in the solar system. Scientists hope the new tool will help them better understand the exotic moon, which boasts volcanic activity 25 times that of Earth.

"This new map of Io's geology provides for the first time a detailed record of the different types of landforms and deposits that form the surface and presents a global context that is important for understanding Io's internal evolution and volcanic processes, as well as for targeting future observations of Io," David Crown, of the Planetary Science Institute in Tucson, Ariz., said in a statement.

"Knowledge of Io's volcanic activity derived from geologic mapping is an important contribution to our understanding of the nature and diversity of volcanism in our solar system," added Crown, who helped put the map together. [Gallery: Amazing Photos of Io]

Io was discovered by Galileo Galilei in 1610. It's the innermost of Jupiter's four large moons and is tugged on hard by the huge planet, as well as its sister satellites Europa and Ganymede. These varied gravitational pulls cause massive flexing of Io's surface and interior, generating tremendous heat that is relieved via volcanism.

That volcanism is frequent and intense, resulting in a surface unlike any other in the solar system.

"Io has no impact craters," said project lead David Williams of Arizona State University. "It is the only object in the solar system where we have not seen any impact craters, testifying to Io’s very active volcanic resurfacing."

The detailed and colorful map reveals a number of volcanic features, researchers said, including volcanic domes and depressions, lava flow fields, mountains, plume deposits and sulfur-rich plains.The new geologic map combines imagery taken by NASA’s Voyager 1 and 2 missions (acquired in 1979) as well as the space agency's Galileo orbiter, which studied Jupiter and its moons from 1995 to 2003.

More than 130 years after the USGS first began producing quality geologic maps here on Earth, it is exciting to have the reach of our science extend across 400 million miles to this volcanically active moon of Jupiter," said USGS director Marcia McNutt. "Somehow it makes the vast expanse of space seem less forbidding to know that similar geologic processes which have shaped our planet are active elsewhere."