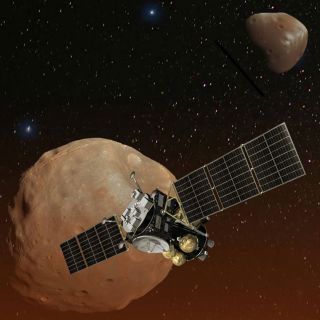 Japan has another sample-return mission in the works, this one to a mysterious moon of Mars.

"The mission was previously in the pre-project phase, where the focus was on research and analysis, such as simulating landings to improve spacecraft design," MMX team members wrote in a blog post. "The focus will now move onto the development of mission hardware and software."

If all goes according to plan, the MMX spacecraft will launch in 2024 and enter orbit around the Red Planet in 2025. The probe will visit both of Mars' moons, Phobos and Deimos, and will touch down on the former for a few hours to snag samples. MMX will then deliver this pristine Phobos material to Earth in 2029, where scientists can scrutinize it in detail.

Such study could reveal key insights about the Red Planet system and our solar system more broadly, JAXA officials have said. For example, the origin of Phobos and Deimos is a subject of debate; some researchers think they're captured asteroids, whereas others have posited that they're made of material blasted off Mars by a long-ago giant impact (or impacts).

"The Martian moons are expected to have accumulated sediment that was ejected from Mars over billions of years," JAXA officials wrote in a mission description.

"Observing the moons will therefore provide information on the evolution of the Martian surface," they added. "Moreover, if the moons were formed during a collision between Mars and gigantic asteroids, the moon material will reveal the original conditions on Mars during this early time, offering insights into the planet's formation and its young environment. Alternatively, if the moons are captured asteroids, their composition will help clarify the transport process of volatile components (such as water) needed for habitability."

JAXA already has considerable experience in sample-return missions to small bodies. In 2010, for example, the agency's Hayabusa mission delivered to Earth tiny bits of the stony asteroid Itokawa. And the Hayabusa2 probe recently snagged pieces of the carbon-rich asteroid Ryugu, which are scheduled to arrive here in December.

Planetary scientists could get their hands on pristine samples from the Martian surface in a decade or so, by the way, if things go according to plan. NASA's life-hunting 2020 Mars rover, which is scheduled to launch this July, will collect and cache samples as part of its varied work on the Red Planet. NASA and the European Space Agency will work together to get this material home, which could happen as early as 2031.