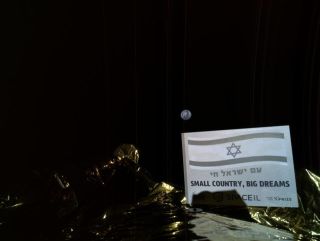 Israel's Beresheet lunar lander captured this selfie with Earth in the background. The spacecraft is scheduled to be captured into lunar orbit on April 4, 2019.
(Image: © SpaceIL/Israel Aerospace Industries)

Israel's history-making Beresheet lunar lander will arrive in orbit around the moon tomorrow (April 4) — if the spacecraft aces a crucial engine burn.

Beresheet has been looping around Earth in elliptical orbits since its Feb. 21 launch and has performed several speed-boosting engine burns to send it higher and farther away. But tomorrow's maneuver will be different; it's meant to slow the spacecraft, so Beresheet can be captured by lunar gravity.

If all goes according to plan, the braking will reduce Beresheet's velocity relative to the moon from 5,281 mph (8,500 km/h) to 4,660 mph (7,500 km/h), mission team members said. (Beresheet is operated jointly by the nonprofit organization SpaceIL and the company Israel Aerospace Industries, or IAI.)

If something goes wrong tomorrow, Beresheet could leave Earth's gravity well while missing the moon's and enter a different and undesirable orbit in the solar system. This would bring the pioneering mission to an end, Beresheet's handlers said.

A successful maneuver will position the spacecraft on an elliptical orbit around the moon, in which the nearest point (perilune) is 310 miles (500 kilometers) from the lunar surface and the farthest one (apolune) is 6,213 miles (10,000 km) away.

In the week following tomorrow's milestone capture, the SpaceIL and IAI teams will perform several maneuvers to circularize Beresheet's orbit around the moon and lower it, until the lander zips 124 miles (200 km) above the lunar surface.

As Beresheet approaches landing, each lunar orbit will last only two hours. And it everything works out, the spacecraft will make an autonomous landing on the moon's Sea of Serenity on the evening of April 11.

That will be an epic moment: To date, only the governments of the Soviet Union, the United States and China have pulled off a soft landing on the moon.

Leonard David wrote the forthcoming book "Moon Rush: The New Space Race," to be published by National Geographic in May 2019. A longtime writer for Space.com, David has been reporting on the space industry for more than five decades. Follow us on Twitter @Spacedotcom or Facebook.