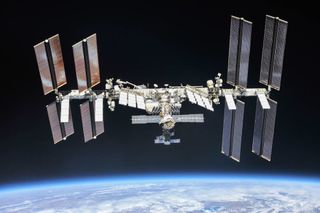 How close is the International Space Station (ISS) to an endgame?

The orbiting complex has been continuously occupied by rotating astronaut crews since November 2000, and the international consortium that runs the ISS has committed to keeping the lights on at least through 2024. But the orbiting lab could keep going even longer than that.

"The extension of the station is being discussed between NASA and the international partners," NASA spokesman Rob Navias told Space.com. "No formal decision on a date for extension has yet been agreed upon, but it's under discussion."

This discussion is of interest to a group of U.S. senators who recently proposed extending ISS operations through 2030 and various commercial entities using the space station for revenue-generating activities. Both of these groups are looking to grow the space economy on the ISS in preparation for space economy efforts in Earth orbit and beyond.

In space terms, four years is an extremely short time; after all, completing the first phase of ISS construction took about 13 years, wrapping up around the time of the space shuttle fleet's final flights, in 2011. The administration of President Donald Trump has already mapped out some bold space plans for the next four years — namely, landing people on the moon by 2024. Where does that leave ISS operations?

Nanoracks, a Texas-based company that helps other commercial outfits develop products and experiments for the ISS, is already thinking about the end of the space station's lifetime. But history shows that it's tough to know when that will happen.

"I've been in this job eight years; when I started, in 2011, the space station was supposed to be retired in 2015," Richard Pournelle, senior vice president of business development at Nanoracks, said at the SpaceCom conference in Houston last November.

Pournelle pointed to three possible signs that such a transition period is coming upon commercial operators. The first is a recent low Earth orbit (LEO) commercialization study led by Nanoracks, which worked on the project with more than a dozen other companies. That report, released in July 2019, suggests gradually transitioning ISS to an "outpost" system that would reuse the upper stages of rockets to create different platforms for commercial customers. These platforms would be taken care of by robots and would either fly freely or be attached to each other. The study called for NASA support but added that the commercial market should take a lead in determining what hardware and experiments would be suitable upon these orbital platforms.

"For Nanoracks, we're looking at the market for LEO commercialization as an ecosystem," Pournelle said. "We're adding all of the different resources and including the type of work on the space station that people want. Building an ecosystem will be a critical part of doing this."

A second sign of change, Pournelle said, is NASA's recent announcement that it would allow a small allocation for commercial payloads on the space station. In June, a new NASA directive promised to "enable commercial manufacturing and production," a NASA statement said at the time. Pournelle said this is important because it extends the space station even further beyond pure science operations. The station, Pournelle said, is now more inclusive of commercial ventures, which could also bring benefits to Earthlings.

The third sign, Pournelle said, has to do with the greater number of commercial modules flying to space. At the same time as NASA released its new directive, the agency opened a solicitation for commercial companies to eventually attach their own modules to the ISS. Over time, several companies would have a chance to use this new commercial space station port and possibly fly their own astronauts to use the facility.

Other companies, including Sierra Nevada Corp. and Northrop Grumman, are already thinking about space modules. Representatives from both companies joined Pournelle on the panel at SpaceCom to talk about possibilities for these future space habitats once the market is ready for them.

Hodgins called for more repurposing of existing space facilities, and for systems that are capable of running multiple missions at the same time, to both "optimize the return on investment" and reduce the number of launches needed to get commercial activities up and running.

Sierra Nevada's principal system engineer, Jeff Valania, said his firm is working on the development of a multipurpose habitat that would be "ideally suited for commercial LEO activities," such as tourism, research and product development.

"It can augment the existing ISS habitable volume or serve as the main habitable module for a stand-alone commercial platform," Valania added. Like Hodgins, he called for a "shared commercial space" that would allow providers to offer many different services and products.