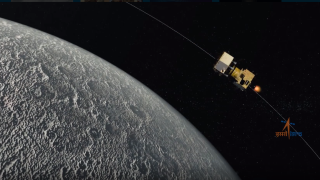 An artist's depiction of the Chandrayaan-2 spacecraft orbiting the moon.
(Image: © ISRO)

An Indian spacecraft may be orbiting the moon, but it's also gathering valuable data about other key players in our solar system.

India's Chandrayaan-2 mission has caught measurements of a few solar flares on Sept. 30 and Oct. 1. The measurements come courtesy of an instrument designed to help identify elements on the lunar surface.

Ironically, the measurements likely won't be useful in that work — but they could teach scientists something new about the sun and the flares of radiation it emits. The new observations are particularly intriguing because they come while the sun is in the calmest period of its 11-year activity cycle, scientists say.

By comparing the two measurements when the spacecraft is more or less directly between the sun and the moon, scientists can determine how the lunar surface responds to X-ray light and, in turn, which elements are present. The solar flare observations can't be used that way because the spacecraft was off to the side, so the angles of the measurements don't line up.

But the Solar X-ray Monitor is much more sensitive than other instruments scientists currently have for measuring solar flares. One of those instruments is on board the GOES-15 weather satellite, which serves as the standard measurement, according to a statement about the new observations released by the Indian Space Research Organisation (ISRO).

And on Sept. 30 and Oct. 1, that instrument saw noticeable changes in X-rays coming off the sun. In contrast to the GOES-15 device — which measures just small wiggles before, during and after the flares — Chandrayaan-2's instrument gathered much more sensitive measurements of the flare sequence.

The Chandrayaan-2 orbiter arrived at the moon in early September. Although the lander associated with the mission seems to have crashed during touchdown, the orbiter is working perfectly, according to ISRO.