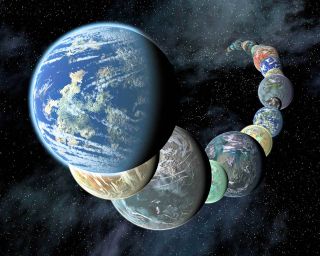 What do Van Gogh's "Starry Night," traditional Ethiopian coffee ceremonies and a river in Alaska have in common? All are now commemorated in the solar systems around ours.

These declarations and hundreds more are the result of a campaign by the International Astronomical Union, which oversees the official names of all features and objects in space. The IAU wanted to mark 2019 as its 100th anniversary and the U.N.'s International Year of Indigenous Languages by allotting 112 exoplanets and the stars they orbit for naming by countries around the world.

"The IAU is delighted to see the broad international interest that this NameExoWorlds campaign has generated," IAU President-elect Debra Elmegreen said in a statement. "It is gratifying that so many people across the globe have helped create a name for a planetary system that is meaningful to their culture and heritage. This effort helps unite us all in our exploration of the universe."

In arranging for the program, the IAU selected 112 stars, each of which scientists have identified one exoplanet orbiting. The IAU then allotted each participating country (or region: nationhood status wasn't strictly adhered to; U.S. territory Puerto Rico, for example, got a separate solar system) a star that can be seen from that country with a small telescope, according to the IAU.

Each country ran its own contest to select finalists for star name, a planet name and a theme for the system in case new planets are discovered, all tying into local cultures, traditions, values or geography. The IAU made the final selection.

The results are eclectic. The United States, which was allotted a yellow star called HD 17156, in the constellation Cassiopeia, ended up with a system named for salmon-rich rivers of southwestern Alaska, with a star dubbed Nushagak and a planet dubbed Mulchatna.

Ethiopia's theme is words associated with coffee and the country's traditional coffee ceremony, with a star called Buna, a common word for the drink, and a planet called Abol, the first stage of the ceremony. The solar system orbits a star known as HD 16175 in Andromeda — no word from scientists on the planet's caffeine content.

The Netherlands' contribution nods to the country's artistic heritage, with a star called HAT-P-6, now nicknamed Sterrennacht, or "Starry Night," after Vincent van Gogh's painting of the same name. The planet in the system is dubbed Nachtwacht, for Rembrandt van Rijn's "The Night Watch" painting.

Some naming systems parallel those of our own solar systems, where the planets were named for Roman gods. Now, star HD 173416 is named Xihe, for a Chinese sun goddess; its planet is named Wangshu for the goddess who drives the moon. HD 75898, Croatia's star, is named Stribor for a Slavic wind god; the planet of the system is named Veles after a god of the earth, waters and underworld. The Dominican Republic's WASP-6 is now dubbed Márohu for a god of drought and protector of the sun; the planet is dubbed Boinayel for a rain god.

Other names focus on historical accomplishments tied to the country. Cuba's star BD-17 63 is now dubbed Felixvarela after a 19th century science teacher; its planet Finlay after Carlos Juan Finlay, an epidemiologist who determined that mosquitoes spread yellow fever.

Some names are firmly rooted here on Earth. Uruguay's system recognizes Ceibo and Ibirapitá, two native tree species. Other names reach for the stars: Sweden's system recognizes an epic science-fiction poem called Aniara, and Bolivia's planet name, Yvaga, is a nod to the Guarani term for the Milky Way: the road to Yvaga, or paradise.

As the IAU had hoped, some of the names are derived from indigenous languages. Argentina's star, HD 48265, is now named Nosaxa, which means the season spring, or the beginning of the year in the local Moqoit language. Brazil's planet is dubbed Guarani after a group of indigenous people living in the area. Puerto Rico's star, Koeia, recognizes the Taíno people of the Caribbean; Canada's star Nikawiy and planet Awasis take their names from the Cree language.

In all 224 cases, the stars and planets will retain their old scientific designations but can be referred to in research papers by the new names as well.

It's unlikely any country has snagged an opportunity to name a planet quite like our own. According to the IAU, their discovery method suggests that most of these exoplanets are probably gas giants like our Jupiter and Saturn.

Of course, these will hardly be the last exoplanets humans seek to name. So far, scientists have identified more than 4,000 exoplanets, and there are plenty more left to discover.

"The number of discoveries continues to double about every 2.5 years, revealing remarkable new planet populations and putting our own Earth and solar system in perspective," Eric Mamajek, co-chair of the NameExoWorlds Steering Committee, said in the same statement. "Statistically, most of the stars in the sky are likely to be orbited by their own planets — they are everywhere."