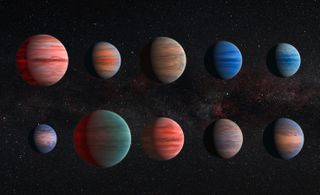 Artists' depictions of a variety of exoplanets.
(Image: © NASA/ESA)

Right now, it's a solar system known only by the designation HD 17156. Before 2019 ends, it will bear an entirely different second moniker — perhaps one suggested by you.

That's because the International Astronomical Union (IAU), which oversees all celestial nomenclature, has decided to mark its 100th anniversary by letting each country name a planetary system. The United States got HD 17156, and today (Oct. 15) is the last day for the public to submit proposed names, so get thinking.

The IAU has put some constraints on the project, of course. First, it needs two names: one for the planet, one for the star. They should be connected in some way that is open-ended enough to allow for naming other, not-yet-discovered stars or planets in the same system along the same principals.

"The proposed names should be of things, people, or places of long-standing cultural, historical, or geographical significance, worthy of being assigned to a celestial object," the IAU wrote in its guidelines. The names don't have to be related to astronomy, although they can be.

The IAU also decided that because the United Nations is this year celebrating the International Year of Indigenous Languages, speakers of these languages are particularly encouraged to submit names that reflect their heritage.

Other rules that you might expect also apply, such as avoiding names already in use, avoiding offensive words and limiting the length of submissions; you should read through the full list before setting your heart on a suggestion.

To submit a name and for more details about the process, visit the Franklin Institute's website here.

The star and planet in question are an odd pair located in the constellation Cassiopeia. The star is similar to our own sun. But scientists have never seen the planet around it — they have identified it based only on tiny changes in starlight caused by small wiggles in the star's location as the planet orbits it. The planet was discovered in 2007.

From those wiggles, scientists have determined that the planet is about 3.5 times the mass of Jupiter, but just a little larger in size, according to NASA. It circles its star every 21 days along an eccentric path that swings close to the star then wanders far from it before returning.

Once submissions close today, a group of astronomers, educators and the like will review the proposals and select 10 contenders they particularly like. The public will be able to vote on those 10 choices between Oct. 30 and Nov. 14. The three most popular will be sent along to the IAU for a final decision.

The new name, which will be used in addition to HD 17156, will be announced in mid-December.