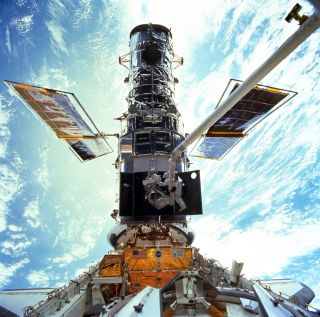 Astronauts upgrade the Hubble Space Telescope in 1999 in this NASA image. The iconic space telescope's Advanced Camera for Surveys suffered a glitch on Feb. 28, 2019.
(Image: © NASA/JSC)

One of the most prolific camera eyes on the Hubble Space Telescope has gone dark, and scientists are scrambling to understand why.

Hubble's Advanced Camera for Surveys instrument suffered a glitch late Thursday (Feb. 28) when an error popped up during what was supposed to be a routine computer procedure, according to a NASA status update.

"The error indicated that software inside the camera had not loaded correctly," NASA officials wrote in the update late Friday (March 1), adding that a team of Hubble engineers, software experts and flight controllers are studying the malfunction. "This team is currently working to identify the root cause and then to construct a recovery plan."

To be clear, the Hubble telescope is still able to study the universe. The nearly 29-year-old observatory has three other science instruments that are all in working order and performing operations. They include Hubble's Wide Field Camera 3, its Cosmic Origins Spectrograph and its Space Telescope Imaging Spectrograph, NASA officials wrote.

Hubble's Advanced Camera for Surveys is a visible-light instrument that has taken some of the space telescope's most dazzling images of the universe. The camera was installed on Hubble in March 2002 by astronauts on a servicing mission. An electrical short knocked the camera offline in 2007, but it was repaired by another crew of astronauts in 2009 during NASA's STS-125 mission, the final servicing flight to Hubble.

The camera malfunction is the latest in a series of glitches for Hubble in recent months.

In January, Hubble's Wide Field Camera 3 took itself offline after onboard software detected abnormal voltage readings. The voltage levels were actually fine, with the glitch tracked to a telemetry issue, NASA officials said.

Last year, a problem with a vital gyroscope used for pointing Hubble stalled science operations for much of October.

The Hubble Space Telescope is a joint mission by NASA and the European Space Agency. It launched in April 1990 on a planned 15-year mission and has lasted nearly twice that long.