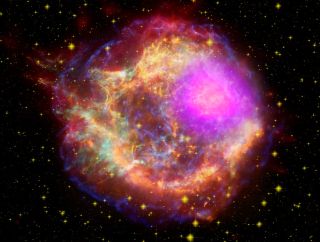 The fact that we are here at all is one of the greatest puzzles of physics. We are made from normal particles such as electrons, but every such particle also has an antimatter companion that is virtually identical to itself, but with the opposite charge. When matter and antimatter come into contact, they annihilate each other in a flash of light.

Physics suggests that matter and antimatter were created in almost equal quantities in the Big Bang. So how come there’s almost only matter left today – why didn’t the matter and antimatter annihilate each other to render the universe lifeless? Our new research has enabled scientists to build a new type of accelerator, based on particles called muons, that could help us find out.

A muon is almost identical to an electron, except that it is 207 times heavier. What’s more, it decays into other particles in two millionths of a second. This lifetime, although short for us, is quite a long time for an unstable fundamental particle, and this explains why muons make up almost all the charged cosmic rays which reach the Earth’s surface.

Much of our ability to investigate the structure of matter at the shortest distances depends on creating beams of particles and accelerate them to high energies. However there are only four stable particles which can be used in this way, the electron and its anti-particle (positron), and the proton and its antiparticle (antiproton).

Particle beams consisting of those have been used for many years, yet both of these pairs have drawbacks. The electron and its partner are very light – when we try to accelerate them, they radiate electromagnetic energy. This is can be useful for applications such as TV but makes it hard to reach the sort of energies which we need to improve our understanding of the universe.

The muons are heavy enough that they radiate much less energy, but fundamental (not made up of smaller particles) so that all their energy is available for the investigation. When scientists created the Nobel-prize winning Higgs particle with protons, they needed a machine 10km in diameter: the Large Hadron Collider. A muon machine, however, could achieve this with a circumference of just 200 metres.

The disadvantage of muons is that, unlike electrons and protons, they are unstable and need to be produced and then rapidly used before they all decay. We can produce muons by taking a narrow, high-intensity beam of protons and running it into a target made of a metal, such as titanium. This produces a beam of another fundamental particle called the pion.

Pions form a beam which fans out. If the original proton beam looks like a laser pointer, the pion beam looks more like a torch beam – with intensity dropping rapidly with distance. The pions then decay to produce the muons, meaning the beam spreads even more – resembling a light bulb.

We cannot accelerate such a beam in a machine like the LHC, so we need to create a beam which spreads out much less. This is challenging given that we have only have two millionths of a second to produce, accelerate and collide it.

But our team of physicists and engineers, from around the world – known as the Muon Ionisation Cooling Experiment (MICE) – has now shown that it is possible. We used a process known as cooling to help compress the beam. This involves passing the muons through a container with liquid hydrogen at -250°C, slowing the particles down. We then passed them through an electromagnetic cavity, which caused the beam to accelerate in the required direction.

By repeating this several times it is possible to create a beam which spreads out much less and has a dense core. This beam can be injected into a particle accelerator to produce a high-energy muon beam. Such a beam can either be collided or left to circulate until the muons decay into an intense beam of neutrinos – far in excess of any neutrino beam which can currently be produced.

In fact, a neutrino beam created from muons is part of a planned Neutrino Factory, which would allow us to answer many questions related to the origin and evolution of the universe – such as the mysterious imbalance between matter and antimatter.

Neutrinos could also help us understand the details of how life-essential elements such as oxygen, carbon and silicon, which are formed in stars, spread across universe. These heavier elements were not produced in the Big Bang and yet are responsible for the planet we live on and all the life around us. We know that bursts of neutrinos, which are released in star explosions (supernovas), are responsible.

We could also collide two beams of muons in the same way as we collide protons at the LHC. The muons, being simpler than the protons, would allow for more precise determination of the properties of the Higgs particle, for example.

The properties of the muon also makes it an invaluable tool in the field of material physics. The ability to create more closely focused beams may improve the current measurements and open up new diagnostic methods.

Our method may also be used to help increase the intensity of any other charged particle beams. It has been a long project lasting over a dozen years, but it has been worth the effort when we consider what a powerful tool we have created.