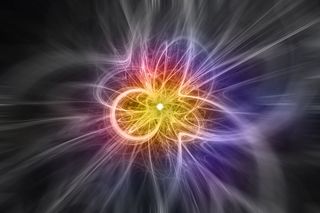 One of the big questions lingering about our universe is why there is so much more matter than antimatter.
(Image: © GiroScience / Shutterstock.com)

At the beginning of time, just moments after the Big Bang, numerous particles came into existence; at the same time, an almost equal number of antiparticles appeared. These subatomic exotics are nearly identical to their ordinary particle kin, but differ in some key ways. When matter and antimatter meet, the two annihilate one another, which means that the dawn of the universe included a spectacular microscopic fireworks display.

Antimatter is sort of like a mirror to ordinary matter, having the same mass but an opposite charge. Neutrinos, which have no charge, are thought to be their own antiparticles, although experiments have yet to confirm this theory. Along with being created shortly after the Big Bang, antimatter can arise from a wide variety of nuclear processes, and can exist for a short time in any of the particle accelerators worldwide.

Since the beginning of time

Antimatter first came to researchers' attention in 1928, when British physicist Paul Dirac was looking at solutions to an equation that describes the movement of an electron traveling near the speed of light.

Dirac realized that the negatively-charged electron should have an opposing partner with a positive charge. These positive electrons, or positrons, were discovered a few years later by physicist Carl Anderson at the California Institute of Technology, who was studying highly energetic cosmic rays from space that strike the Earth's atmosphere, producing a shower of other particles. Anderson witnessed, in his particle detector, something with the same mass as an electron but with a positive charge.

Dirac was awarded the Nobel Prize in physics in 1933 for his discovery; Anderson's research won him the prize in 1936. In his acceptance speech, Dirac speculated that perhaps the Earth just happened to be composed of matter but that there could be stars made of antimatter lurking out in the universe.

But when astronomers train their telescopes out into space, they don't see antimatter stars nor any large pockets of antimatter anywhere in the cosmos. The reason for this lack and the fact that the universe seems to be comprised entirely of particles and not antiparticles, was called "one of the great mysteries in physics" in a 2012 paper in the New Journal of Physics.

In 2018, scientists were even more perplexed when they made the most precise measurement of antimatter to date and found that antimatter and matter behave nearly identically. The finding suggests that particles and their opposites should have been created in equal numbers at the beginning of the universe; however, if true, the fact that matter prevails over antimatter is ever more difficult to reconcile.

Researchers are diligently seeking the factor that explains the dominance of matter over antimatter in our cosmos. Calculations suggest that just after the Big Bang, when particles and antiparticles annihilated one another, there was a slight imbalance in their numbers. Less than one in every billion ordinary particles survived the melee and went on to form all the matter around us today. But why?

Scientists worldwide are working to determine if a neutrino acts as its own antiparticle, which would have allowed a small fraction of neutrinos to transition from antimatter to matter at the universe's inception. In this scenario, a slight matter imbalance would have existed back then.

Antimatter has been created and sustained in small quantities in particle-physics laboratories. Some research teams have gone so far as to create antiprotons, and drive them around in a van so that physicists at CERN could transport them to a nearby facility.

Readers of Dan Brown's book "Angels and Demons" (Pocket Books, 2000) — which (spoiler alert) involves a plot to blow up the Vatican using antimatter — might worry about such experiments. But worry not: If CERN scientists took all the antimatter they ever created and annihilated it with matter, they would barely have enough energy to light a single electric light bulb for a few minutes, according to a website FAQ from the CERN laboratory.