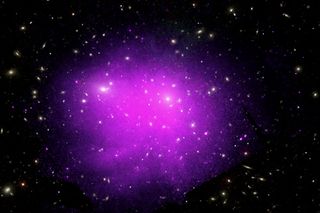 An X-ray image of the Coma galaxy cluster shows the hot gas glowing as the purple and pink colors.
(Image: © NASA/CXC/Univ. of Chicago)

A group of scientists set out to learn whether hot gas in galaxy clusters is as thick as honey sliding off a spoon or as smooth as milk being stirred in a coffee cup.

The result is a recent study that looked at how hot gas found in the Coma galaxy cluster behaves by using two weeks of observations from NASA's Chandra X-ray Observatory. The researchers observed that despite being abundant in the galaxy cluster, the hot gas had low viscosity (so more like milk).

"Our finding suggests that gas viscosity in Coma is much lower than expected," Irina Zhuravleva, a researcher at the University of Chicago and lead author of the study, said in the statement.

Galaxy clusters have three main components — individual galaxies, dark matter and gas that measures in the millions of degrees in Fahrenheit or Celsius. It's that third component that the scientists focused on in the new research.

The gas found in Coma can't be mimicked in a laboratory setting because it has such a low density, which made the X-ray observations particularly crucial, according to the statement.

The researchers behind the new study looked at an area where the density of the gas is even lower, away from the center of the cluster galaxy. There, the particles of the hot gas had to travel farther, around 100,000 light-years, in order to interact with one another. That long journey allowed for the Chandra X-ray Observatory to probe the particles.

"Perhaps one of the most surprising aspects is that we were able to study physics on scales relevant to interactions between atomic particles in an object that's 320 million light-years away," Alexander Schekochihin, a theoretical physicist at the University of Oxford and co-author of the study, said in a statement. "Such observations open a great opportunity to use galaxy clusters as laboratories to study fundamental properties of hot gas."

Observing the viscosity of hot gas allows scientists to learn more about the dynamics between galaxy clusters, such as collisions and mergers.

The study was published in Nature Astronomy on June 17.