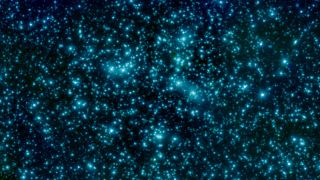 The star cluster Abell 2744, also known as Pandora's Cluster, as imaged by the Spitzer Space Telescope in infrared.
(Image: © NASA/JPL-Caltech)

Paul M. Sutter is an astrophysicist at The Ohio State University, host of "Ask a Spaceman" and "Space Radio," and author of "Your Place in the Universe." Sutter contributed this article to Space.com's Expert Voices: Op-Ed & Insights.

Clusters of galaxies hold the prestigious title of "largest gravitationally bound structures in the universe," which is no small feat. Tipping the scales at a million billion times the mass of the sun, these bustling cities of the cosmos aren't going anywhere anytime soon. That's the whole point of being gravitationally bound: The clusters' gravity allows them to resist the expansion of the universe and keep their stuff generally together for a very long time.

As their name suggests, galaxy clusters host a lot of galaxies, typically anywhere from 100 to over 1,000. And yet, when you add up the masses of all the member galaxies, you get less than 1% of the total cluster mass. The galaxies aren't alone, thankfully; they're joined by a hot, thin plasma that threads and winds its way throughout the cluster. But even that plasma accounts for only 10% of the cluster mass.

Most of the mass of a cluster of galaxies, and the thing that really keeps them gravitationally bound, doesn't come from the galaxies or gas that we can detect. In fact, we can't see it at all. The mystery mass is dark matter — and galaxy clusters give us some of the strongest clues as to the nature of this mysterious component of the cosmos.

Back in the 1930s, when nobody knew much about anything cosmological, astronomer Fritz Zwicky was studying the Coma cluster, a gang of about 1,000 galaxies sitting around 320 million light-years away from Earth. Fritz was especially interested in the motions of those galaxies, and he found something rather peculiar. The galaxies were moving all right … fast. Way fast. Too fast.

The galaxies were buzzing around the cluster at such a tremendous clip that there simply shouldn't be a cluster anymore. They had more than enough kinetic energy to overwhelm the feeble gravitational bonds that supposedly kept them chained inside the cluster.

The cluster should've dissolved a long time ago. And yet, there it was, staring Fritz in the face.

Not knowing what to make of it, Fritz proposed that there was some sort of matter filling up the cluster that he couldn't see. In his words: "dunkle materie," or, in English, "a dark matter."

Looking through the lens

Clusters of galaxies are massive but also relatively compact. While they have no sharply defined edges, they generally extend a few tens of millions of light-years across. OK, fine, that's large to us humans, but it's pretty small compared to the cosmos.

This compactness makes clusters excellent gravitational lenses. Through Albert Einstein's general theory of relativity, we know that massive objects act like lenses, bending the path of any grazing beams of light. How much the light gets bent depends on how massive the intruding object is, and by studying the path of background light, we can figure out how that matter is distributed, whether or not you can see it shine.

And when we look at a typical galaxy cluster, lo and behold, we see all sorts of lensed galaxies. The light from background galaxies gets warped and distorted on its journey through the cluster, forming everything from elegant arcs to less-than-elegant squiggles. By comparing those distorted shapes to those that galaxies normally have, we can reconstruct what the cluster is made of and where all its guts are.

The result, from cluster to cluster across the cosmos? There's much more than meets the eye. The galaxies and gas inside a cluster aren't nearly enough to account for the extreme warping of light from background sources. Something else must be filling up the clusters without emitting any light of its own (otherwise we would have seen it). It has to matter, and it has to be dark.

No. 1 with a dark bullet

Sitting about 3.7 billion light-years away from Earth is a very unfortunate looking cluster of galaxies, nicknamed the Bullet cluster. It recently suffered a near-fatal collision with a nearby cluster — and we happened to capture the clusters in the middle of this tragic moment, with one cluster punching its way through the other and coming clean out the other side.

Investigating the accident scene in different ways paints a surprising picture. The galaxies themselves hardly noticed the collision: They take up so little volume that they just sailed past each other like ships in the night. The hot, thin gas of the clusters did exactly what gases do when they collide: It … collided. X-ray images from the Bullet cluster reveal shock fronts, turbulence and other tangled messes at the midpoint of the impact.

And gravitational lensing reveals where most of the overall mass is post collision. It's definitely not in the center, tangled up with the gas. And it's not pinpointed on the individual galaxies, either. No, the bulk of the matter is dispersed on the outer edges of the Bullet cluster, meaning that whatever that mass is, it too sailed through its counterpart in the other cluster and hardly noticed the experience. That means that most of the mass of the Bullet cluster doesn't interact with light or even itself. It's a different form of matter, and (are you ready for this), it's dark.

Learn more by listening to the episode "What Are the Mighty Clusters of Galaxies?" on the "Ask a Spaceman" podcast, available on iTunes and on the web at http://www.askaspaceman.com. Thanks to @davidthepawn, 185transformer, Andreas C., Filipe S., Grace M., @peteburkeet, Dean and Martin N. for the questions that led to this piece! Ask your own question on Twitter using #AskASpaceman or by following Paul @PaulMattSutter and on facebook.com/PaulMattSutter.