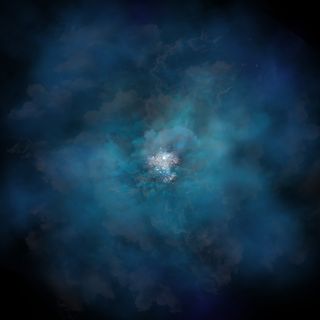 This artist's depiction shows a halo of gas that surrounds a galaxy and is illuminated by Lyman alpha emission, a narrow band of ultraviolet light. The galaxy BX418 has such a halo about 10 times its size.
(Image: © T. Klein/UWM)

A distant galaxy boasts a gaseous halo that may shed light on how early galaxies evolved, new research shows.

Using the W. M. Keck Observatory on Mauna Kea, in Hawaii, a team of astronomers analyzed the gas halo surrounding Q2343-BX418, a small, young galaxy located about 10 billion light-years from Earth. This galaxy, researchers say, serves as an analogue to younger galaxies that are too faint to study in detail, according to a statement from the observatory.

"In the last several years, we've learned that the gaseous halos surrounding galaxies glow with a particular ultraviolet wavelength called Lyman alpha emission," Dawn Erb, a physicist at the University of Wisconsin-Milwaukee and lead author of the study, said in the statement. "There are a lot of different theories about what produces this Lyman alpha emission in the halos of galaxies, but at least some of it is probably due to light that is originally produced by star formation in the galaxy being absorbed and re-emitted by gas in the halo." [10 Amazing Space Discoveries by the Keck Observatory]

Specifically, the team used one of the observatory's newest instruments, the Keck Cosmic Web Imager (KCWI), to take a closer look at the properties of the galaxy's gas halo, where gas enters and exits the system. Therefore, their findings could offer clues about the stars forming within the galaxy.

"The inflow of new gas accreting into a galaxy provides fuel for new star formation, while outflows of gas limit a galaxy's ability to form stars by removing gas," Erb said in the statement. "So, understanding the complex interactions happening in this gaseous halo is key to finding out how galaxies form stars and evolve."

Using the KCWI, which combines a camera and a spectrograph to capture a detailed view of the faint clouds of gas, the researchers were able to trace the gas in the galaxy's halo, plot its velocity and spatial extent, and then create a detailed 3D map of the structure of the gas and its behavior, according to the statement.

Their findings, published July 24 in The Astrophysical Journal Letters, suggest that the galaxy is surrounded by a roughly spherical outflow of gas that varies significantly in density and velocity. However, further study using the KCWI to analyze the halos of other galaxies is needed to confirm whether the results are typical.