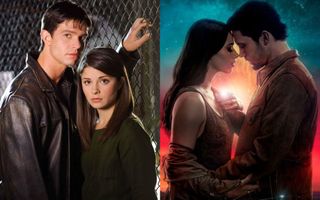 Behr played interstellar visitor Max Evans in the original "Roswell" television series from 1999 to 2002 on the WB Network and UPN. He will appear in at least four episodes of the reboot's second season, which will air on The CW Network. Shiri Appleby, who played human hero Liz Parker opposite Behr's vulnerable alien character, is on board to direct some episodes in the second season of this new installment.

"Roswell, New Mexico" is based on the infamous conspiracy theory that an alien spacecraft crash-landed in New Mexico in 1947. Viewers interested in the modern reboot can now stream the entire first season on The CW app. New episodes will air sometime mid-season in early 2020.

"We’re very excited that Jason will be joining us for a multi-episode arc," Carina Adly MacKenzie, creator and showrunner of the reboot, said in a recent statement from Warner Bros. (which helped to develop The CW Network back in 2006).

"It’s only fitting that he’s playing a (currently top secret) character with deep ties to Roswell, New Mexico’s history. Working with him has already been such a special experience for all of us — particularly when [Roswell co-star] Shiri Appleby was on set to direct him. I was such a huge fan of Roswell as a kid, so having their stamp of approval — not to mention their expertise and advice —  has really meant the world to me, the cast and the crew," she added.

Another big announcement from the panel is that actor Gaius Charles ("Friday Night Lights," "Grey's Anatomy") will play a recurring character with a possible plotline related to the 1947 conspiracy, executive producer Chris Hollier hinted at during the NYCC panel.

Just like the original television series, this new adaptation of the 1998 "Roswell High" books follows three alien protagonists — Max, Isabel, and Michael — who are actively hiding their real identities from those who wish them harm. To update the conversation and relate it to modern, real-life xenophobia, "Roswell, New Mexico" revisits the lead character's Mexican roots to explore the lives of undocumented people and racial tensions in a border state.