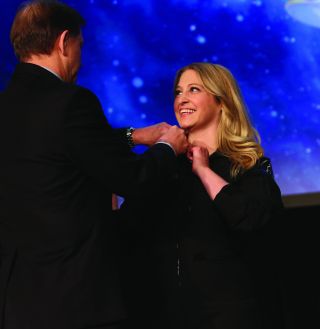 Space fans of New York City have a lot to look forward to on Saturday (Oct. 17), as the Explorers Club celebrates "Space Stories" with an all-day event.

The day begins with breakfast, followed by a presentation by Robert Pearlman, founder and editor of collectSPACE.com (and Space.com contributor). Next, John Elbon, chief operating officer for United Launch Alliance, will discuss his work with the Atlas, Delta, and Vulcan rocket families.

After a lunch break, three more speakers will take the stage. First, space artist Tim Gagnon, who has worked with space shuttle and space station crews to design mission badges.

The next speaker, Beth Moses, is the chief astronaut instructor at Virgin Galactic and will give her presentation just days after unveiling the company's new flight suit at an event held with Under Armour.

The day will wrap up with a presentation by Carlos Toros, a filmmaker who directed "First Light," a film about the Chandra X-ray Observatory to commemorate its 20th anniversary.

Tickets are still available for the event, which will be held at the Explorers Club New York City location.