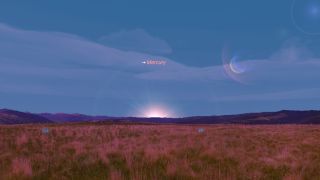 The innermost planet Mercury tends to be pretty hard to see, because it's so close to the sun. But today (Feb. 26), the planet will be at its farthest point from the sun, making it easier to spot as it escapes the star's blinding glare.

In the Northern Hemisphere, skywatchers should look for Mercury just around sunset (while being careful to never, never look directly at the sun). At dusk, Mercury will be almost directly above the sun. But you'll have to look quickly, because Mercury will set along with the sun at nightfall.

Mercury will be only about 10 degrees above the horizon at sunset, according to NASA. To put that into perspective, 10 degrees is about the width of your fist held at arm's length. Space.com's skywatching columnist Joe Rao says the planet will be really easy to see, because with Mercury's visual magnitude of -0.4, there will be nothing else nearby (planets or stars) that's anywhere near as bright.

You can pull out binoculars or a telescope to look at Mercury, but you won't see much detail unless you're using professional-grade equipment. The planet will still look like a bright spot in the sky. Because Mercury is so small, details on its surface are too tiny to resolve. However, skilled observers may be able to make out that Mercury is at dichotomy, or half phase.

Even if you miss Mercury's brightest date, you'll still have a chance to catch it over the eight following days. But with each day, the planet will fade quickly. After eight days, it will be dimmer by two full magnitudes and will be about as bright as the North Star (Polaris).

Mercury isn't the only planet visible in the night sky this month. This article by Rao will tell you what other planets in the solar system you can see this month.