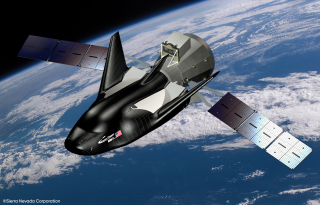 ATLANTA — Sierra Nevada's Dream Chaser space plane is preparing to carry cargo to the International Space Station (ISS) by the spring of 2021. But that isn't stopping the company from continuing to prepare for human missions aboard the launch vehicle.

Steve Lindsey, a former astronaut and vice president of space exploration systems for Sierra Nevada, told Space.com that the two versions of the vehicle, one for carrying cargo and the other for ferrying people, are not that different.

Originally, Sierra Nevada planned to use Dream Chaser to shuttle human passengers to the ISS, but the company missed out on the 2014 contract award for NASA's Commercial Crew Program, which went instead to SpaceX and Boeing. In 2016, NASA selected the space plane, along with SpaceX and Orbital ATK spacecraft, to carry cargo missions to the space station by 2024. Lindsey said Dream Chaser should fly in 2021.

"We're continuing to work on the crewed program," he said.

Based on a modified Soviet design, Dream Chaser has half the wingspan of the Learjet 45, a small business aircraft. Like the space shuttle, Dream Chaser would be lifted into space onboard a rocket — in the Dream Chaser's case, a Vulcan Centaur rocket — then land on the ground. But while NASA's space shuttle was tied to specific landing zones, Dream Chaser should be capable of landing on major runways that can handle typical large passenger airplanes. That flexibility, along with the plane's use of nontoxic fuel should allow Dream Chaser to land on runways around the world.

Dream Chaser's 2021 mission will be the first of at least six orbiting flights made to the ISS, delivering equipment and supplies to the space station and returning experiments and other cargo back to Earth.

Although NASA contracts are helping to develop Dream Chaser, the vehicle isn't solely tied to the space agency. That means the space plane won't be completely grounded if NASA decides to stop working with Sierra Nevada. The company is looking at a variety of commercial companies interested in using Dream Chaser.

"We didn't get into this just to provide service to the space station," Lindsey said.

In addition to flights to and from the ISS, Dream Chaser can also provide transportation into low Earth orbit (LEO), a region from 99 to 1,200 miles (160 to 2,000 kilometers) above the planet's surface. There, the unique microgravity environment, in which objects experience a constant state of free fall, allows for a variety of scientific experiments that can't be performed on Earth.

When experiments are carried to the ISS, which is also in LEO, they must remain there until the next cargo ship arrives, which can be several months. Dream Chaser can shorten that time frame, which is useful for experiments that require briefer stints in microgravity, Lindsey said. The space plane can carry experiments to LEO for short- or long-duration missions.

Dream Chaser may one day soar beyond the ISS, too. Lindsey said that the vehicle is being built to integrate with other potential facilities being considered as successors to the orbiting laboratory, though he declined to name specifics. The ISS is funded through at least 2024, though a push to keep the station in orbit longer died last year. And in a news briefing on Wednesday (Aug. 14), Sierra Nevada officials said the company is also open to using Dream Chaser for NASA's Lunar Gateway and potentially even space tourism flights.