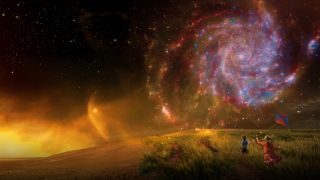 What experiences could humans share with other forms of life?
(Image: © NASA)

If you want to share a meal with an alien, you may have to begin by broadening your definition of a meal. A lot.

That's the conclusion Christy Spackman, a social scientist, chemist and chef at the School for the Future of Innovation in Society at Arizona State University (ASU), came to when she began thinking about the role food could play in establishing diplomatic relationships with extraterrestrial beings. Her "menu" was inspired by an ASU project focused on developing communities beyond Earth.

Spackman started by thinking about how films and other science fiction depict aliens, but she wasn't satisfied by the narrow-mindedness of those portrayals. "Even though the aliens are dissimilar [from humans] in color or size, they sort of eat the same way we do — unless they are a slug that is eating us," she told Space.com.

Related: How Do Scientists Search for Extraterrestrial Life?

She wanted to explore a vision of life that was broader, stranger, less accessible. "What are the sorts of experiences that I could share with aliens around me — with palm trees, with grass?" Spackman said. "How do you eat with a rock?"

And when it comes down to it, Spackman said, sharing a meal can be about much more than simply putting food in one's mouth. Think of holiday feasts or meticulously stage-managed diplomatic meals — each is an entire, complex experience.

So, Spackman put together a menu of sensory experiences she would want to share with aliens to convey the reality of living as a human in her patch of the Earth, the greater Phoenix area. First comes a feast of light at James Turrell ASU Skyspace, an architectural installation surrounding an opening to the sky about 15-foot square. "Your first course is actually the perceptual experience of how light interacts with eyes, and that's going to be entirely different for every species at [the] table," Spackman said.

Next would come the varied experiences of the smell of creosote after a rain. "It reminds me of a freshness, a slight greenness," Spackman said, "something that kind of makes your nose feel like it's come up against a metal, but a metal that you like." The next sensation might be that of standing below the flight path of arriving and departing airplanes near the Phoenix airport, feeling the vibrations of sound ripple through the atmosphere.

From there, the sensory meal continues with 15 minutes of standing out in a monsoon rain in August, when a quick-lived storm dumps buckets of water, then disappears again. Spackman saved the traditional fare of menus for last, offering a dessert of steamed pudding made from local mesquite seeds, topped with bitter orange marmalade and cream. She designed the dish to evoke the complicated cultural history of a colonized region injected with "that weirdness of the cow that really doesn't want to be hanging out in the desert," she said.

Whether Spackman's individual courses resonate with you or not, the project wasn't simply an idle thought experiment; it also reflects very real societal issues we need to confront, she said. "When we ask questions about space, we're really asking about each other," Spackman said. "When we're talking about aliens, we're really talking about those people around us who maybe we don't entirely understand."

And any meal shared with aliens would surely include some awkward moments or situations that simple etiquette guidelines can't quite encompass, making it an experience in and of itself. "It calls for generosity of spirit, both in those who are producing and for those who are consuming, and a willingness to say, 'This will never be perfect, so we can meet at the good enough,'" Spackman said.