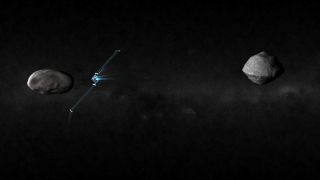 An artist's depiction of the DART spacecraft at the binary asteroid Didymos.
(Image: © NASA/Johns Hopkins APL)

NASA's first-ever planetary defense mission is preparing to launch in June 2021, making sure all the pieces are in place for the spacecraft to successfully slam into the small "moon" of a binary asteroid.

That mission, called the Double Asteroid Redirection Test (DART), will culminate in October 2022 with the much-anticipated impact with the binary asteroid Didymos. But mission staff have plenty to keep them busy between now and then, and they know they will be in the spotlight as the mission continues. That's in part because DART represents NASA's first foray beyond scientific and human spaceflight missions; instead, this mission will test a technology that could theoretically save Earth from a dangerous collision with a threatening asteroid.

"People can really get into the whole, 'Oh my god, you're trying to move the what?'" Elena Adams, of the Johns Hopkins University Applied Physics Laboratory, told Space.com during the International Academy of Astronautics' Planetary Defense Conference, held earlier this month in College Park, Maryland. Adams is the mission systems engineer for DART. "I think people are very excited, too, because they wouldn't want to be dinosaurs."

Related: A Fake Asteroid Headed to Earth Can Really Make You Think

As mission systems engineer, Adams' job is to communicate and coordinate between all the different pieces of the DART mission — from the spacecraft itself to the launch vehicle to how the team members will work together over the course of the mission.

A key recent development in that equation is the rocket. The DART team had been assuming the craft would be piggybacking on a launch, which would have lengthened the journey from Earth to Didymos, but NASA decided to buy a SpaceX Falcon 9 launch dedicated to the mission.

"Before, we had to spend a lot of time spiralling around Earth; we didn't know where we were going to get dropped off," Adams said. "Now, we have a dedicated launch vehicle and we'll be able to just go where we want to go."

In the wake of that decision, Adams and her colleagues are meeting with SpaceX this month to begin coordinating for the launch, which will blast off from Vandenberg Air Force Base in California in June 2021.

Adams is also looking ahead to a series of crucial mission milestones happening this year. DART's final review by NASA will happen in June. The pieces of the spacecraft will also start coming together this summer, with the body of the probe arriving at the Applied Physics Laboratory in June for testing. Then, the spacecraft will go back out again to pick up its propulsion system, a new electric ion engine that DART will test.

Unlike traditional NASA missions that are packed with scientific devices, DART will carry just one instrument, an advanced camera that will capture a spacecraft's-eye view of the approach. "It will take amazing images along the way," Adams said. "But really, it's a targeting camera." For now, the main priority with that camera is making sure that the unwieldy roll-out solar arrays the mission will test don't smear the camera's images.

And then, of course, there's the people component, making sure the team behind the mission is ready to kick into high gear as the DART spacecraft approaches its target in October 2022.

"For the last 10 days, you need to have 24-hour staffing, and it's a small mission — there are only a few of us," Adams said. "So, we're trying to figure out what's the best way of breaking out all the maneuvers and what are we doing in contingencies."