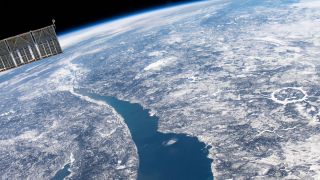 What would we do if we knew an asteroid would hit Earth in 2027? That's what NASA personnel will explore during a simulation taking place next week.

The project will play out as a tabletop exercise held during the 2019 Planetary Defense Conference in College Park, Maryland. NASA asteroid experts have prepared a fictional scenario in which scientists identify an asteroid that seems poised to crash into Earth in 2027. They'll talk through how to determine what regions face what risks and how to respond — all in the hopes that if they ever face a similar situation in real life, they'll be ready for it.

"These exercises have really helped us in the planetary defense community to understand what our colleagues on the disaster management side need to know," Lindley Johnson, NASA's Planetary Defense Officer, said in a statement. "This exercise will help us develop more effective communications with each other and with our governments."

You'll be able to watch the Planetary Defense Conference live here, beginning Monday, April 29, at 8 a.m. EDT (1200 GMT), courtesy of NASA. You can watch directly from NASA and its partners here.

Related: How a 2017 Asteroid  Is Helping NASA Defend Earth

The exercise is part of a larger program designed to meet the specifications of the National Near-Earth Object Preparedness Strategy and Action Plan, a guidance document created by the White House.

During the conference, the gathered asteroid experts, emergency management personnel and others will receive more and more detailed information about the hypothetical risk over the course of the week.

The initial information the team will be working with is already available: first spotted on March 26, asteroid 2019 PDC appears to have an orbit that passes within 0.05 astronomical units (the average distance from the Earth to the sun) of Earth. And when NASA and European Space Agency systems work on that orbit, both agencies suggest that the space rock could theoretically cross paths with Earth on April 29, 2027 — eight years to the day from the beginning of the conference.

The preparatory documents end with all the hypothetical data gathered by April 29, 2019, at which point our odds are looking worse. Calculations currently give the fictional rock a 1% chance of hitting our planet.

And from there — well, we'll have to wait and see what happens next. Space.com will be attending the conference, so stay tuned to hear how humanity confronts this fictional existential threat.