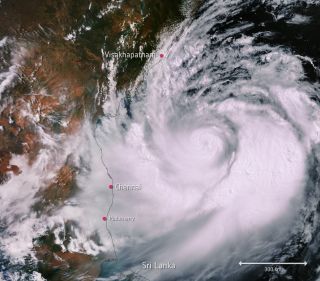 In this image, captured on May 1, Cyclone Fani stretched more than 435 miles (700 kilometers) across.
(Image: © Copernicus Sentinel/ESA, CC BY-SA 3.0 IGO)

As Cyclone Fani strengthened and made landfall over eastern India on May 3, a network of weather satellites kept an eye on the massive storm.

The cyclone peaked with wind speeds of up to 127 mph (204 kilometers/hour), the equivalent of a Category 4 hurricane. (Hurricanes and cyclones are the same basic weather phenomenon, just located in different regions of the world).

Over the course of Fani's formation and dispersal, the storm was watched by weather satellites including NOAA-20, Himawari8 and Suomi NPP, all run by the National Oceanic and Atmospheric Administration, as well as NASA's Terra satellite.

Before the storm's arrival, the Indian government evacuated more than 1 million people in a procedure already being credited for saving countless lives in a poor, low-lying region of the country. Several people died, according to current tallies, but that's many fewer than might have been expected — the last major storm to hit the region, 20 years ago, killed more than 10,000 people.

Meteorologists first identified the patch of air that would become Cyclone Fani about a week in advance, and the storm closely matched their predictions of where it would make landfall, giving the government time to roll out a detailed notification and evacuation plan.

After making landfall, Fani headed northeast and started to weaken.