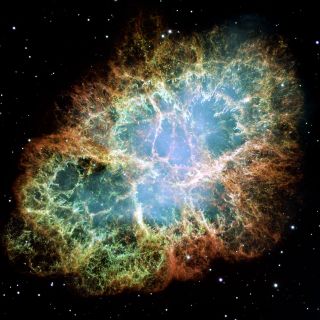 Most of the universe's gold, uranium and other heavy elements are generated from rapidly whirling collapsing stars, a new study finds.

The universe's three lightest elements — hydrogen, helium and lithium — were born in the earliest moments of the cosmos, just a minute or so after the Big Bang. Elements up to iron on the periodic table were mostly forged later, in the cores of stars.

However, the way in which elements heavier than iron on the periodic table, such as gold and uranium, were created has been a long-standing mystery. Previous research suggested a key clue: atomic nuclei often needed to absorb neutrons rapidly, a phenomenon known as the "r-process" for short.

"It's fascinating to me that, even this year, in which we celebrate the 150th anniversary of the periodic table, there is still so much we don't quite understand about how the heavy elements of the universe are created," study lead author Daniel Siegel, a theoretical physicist at the Perimeter Institute for Theoretical Physics in Waterloo, Canada, told Space.com. Those elements include "gold and platinum and the rare-earth elements in our portable electronics," he said.

In 2017, with the aid of ripples in the fabric of space and time detected via the LIGO and Virgo gravitational-wave observatories, astronomers detected a collision between neutron stars. These are superdense neutron-rich corpses of large stars that perished in catastrophic explosions known as supernovas. The gravitational-wave discovery led researchers to suggest that most r-process elements were forged in the cocoons of material blasted off of merging neutron stars.

The neutron-star collision that researchers detected in 2017 resulted in a black hole. Previous research suggested that the dominant source of r-process elements from that merger was the accretion disk of debris that formed around the black hole.

"We immediately realized [that] the same physics could be found around completely different astrophysical systems," Siegel said.

The researchers developed computer simulations of the accretion disks that are expected to form around collapsars, which are collapsing, rapidly spinning massive stars whose deaths result in supernovas and black holes.

"We find that in these accretion disks, a lot of material circularizes around the newly born black hole," Siegel said. In these incredibly hot, dense, innermost regions of these accretion disks, particles such as electrons, positrons and neutrinos interact in ways that lead protons to convert into neutrons, generating "the initial conditions needed for the formation of heavy elements, such as gold and platinum," he said.

"What we find in our study is that collapsars should produce at least 80% of the heavy-element content in our galaxy," Siegel said. "Almost 20% would come from neutron-star mergers."

In the future, the researchers want to investigate how elements are created in other kinds of accretion disks, such as supernovas resulting from strongly magnetized stars, Siegel said. "We also want to explore the cosmological implications of our work — what our results suggest for the chemical evolution and assembly of galaxies," he added.

Siegel and his colleagues Jennifer Barnes and Brian Metzger at Columbia University in New York detailed their findings online May 8 in the journal Nature.