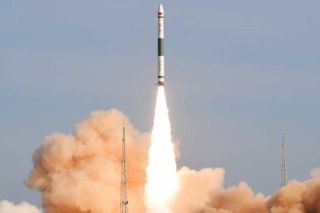 Launch of the second Kuaizhou-1A from Jiuquan in September 2018.
(Image: © CASIC)

HELSINKI — Chinese defense contractor CASIC is preparing to launch a new solid propellant launch vehicle in the first half of the year as part of a multiplatform commercial space strategy.

The Kuaizhou-11 (KZ-11) debut launch will carry six satellites, according to Chinese language news portal 3SNews, though it provided no information on the payloads or clients, nor more precise information on timing.

The new rocket will have a liftoff mass of 78 metric tons and be capable of lifting 1,000 kilograms to a 700-kilometer sun-synchronous orbit (SSO) or 1,500 kilograms into a 400-kilometer low Earth orbit using either 2.2 or 2.6-meter payload fairings, making it the largest Chinese solid propellant launch vehicle so far.

The Kuaizhou-11 has been developed by the China Aerospace Science and Industry Corporation (CASIC), a huge state-owned enterprise. The commercial Kuaizhou launch vehicles, or 'fast vessel', have been derived from CASIC's missile technology in order to provide fast-response and low-cost access to space.

When the Kuaizhou-11 does take off, it will, like existing and planned future Kuaizhou rockets, be launched from a transporter erector launcher (TEL). It will likely launch from the Jiuquan Satellite Launch Center in the Gobi Desert, run by the People's Liberation Army.

Earlier public statements from CASIC and subsidiary Expace, a commercial launch provider, claim launch costs of between $10,000 to $20,000 per kilogram for the Kuaizhou series, and expect this to fall to $5,000 per kilogram.

Design work on the Kuaizhou-21 launch vehicle began in 2017, according to Chinese state media. It will have a diameter of 4.5 meters and be capable of sending 20-metric tons into a low Earth orbit.

CASIC in December saw the launch of the first satellite for its 156-satellite Hongyun ('rainbow cloud') low Earth orbit wideband communications constellation and is planning an 80-satellite narrowband constellation for Internet of Things connectivity named Xingyun as well as a Tengyun project to develop a reusable space plane.

While CASC is restricted to commercial payloads, the China Aerospace Science and Technology Corporation (CASC), a sister company to CASIC and the main contractor for the Chinese space program, carries out China's government and military missions using its family of Long March launch vehicles.

CASC is meanwhile preparing for the debut flight of a new commercial launcher, named Jielong-1 ('Smart Dragon-1'), with the company stating the flight will take place in the first half of 2019.

Jielong-1 is designed to be "fast, agile and flexible" and capable of putting 150 kilograms into a 700-kilometer SSO, but appears to be the first step in development of new, more innovative and competitive launchers from CASC.

Chinarocket was founded in 2016 and will provide competition to private launch vehicle companies — such as Landspace, OneSpace and iSpace — that have emerged in China since the opening of the sector to private capital in 2014 as part of a national strategy to foster innovation.

CASC's Long March 11 light-lift solid launcher will also have its first sea launch around mid-2019. The mission will take place in the Yellow Sea, situated between China and the Korean Peninsula, but the flight is expected to pave the way for possible future low inclination launches.