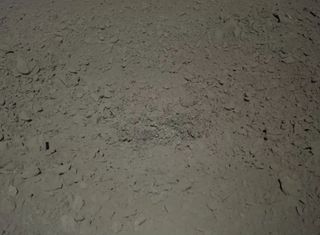 China's Yutu 2 moon rover captured this image of glassy material from the edge of a small crater.
(Image: © CNSA/CLEP)

The China Lunar Exploration Program has released a photo from the Yutu 2 moon rover that reveals the likely nature of a previously unidentified material.

The rover — part of the Chang'e 4 mission, which in January completed the first-ever soft landing on the far side of the moon — made the discovery in July. Earlier reports on the few published details captured widespread interest.

The photo taken by Yutu 2's main camera shows the center of a crater containing material that is colored differently than its surroundings and that contains bright spots. The image was released by Our Space, a Chinese-language science-outreach publication, via its Weibo social media account on Oct. 8.

While gaining the attention of the Yutu 2 team, the material does not appear altogether mysterious, as claimed by Chinese media.

Clive Neal, a lunar scientist at the University of Notre Dame in Indiana, told Space.com that the new image reinforces the previous suggestion that the material is broadly similar in nature to a sample of impact glass found during the Apollo 17 mission in 1972.

Sample 70019, collected by astronaut and trained geologist Harrison "Jack" Schmitt, is made of dark, broken fragments of minerals cemented together and black, shiny glass. Impact melt glass can be created or modified through high-speed meteor impacts on a planetary surface.

Dan Moriarty, NASA Postdoctoral Program fellow at the Goddard Space Flight Center in Greenbelt, Maryland, has analyzed and processed the image, seeking clues as to its precise nature. While this compressed image lacks a lot of the useful information a raw image would contain, Moriarty said he could gain insights by adjusting parameters.

"The shape of the fragments appears fairly similar to other materials in the area. What this tells us is that this material has a similar history as the surrounding material," Moriarty said. "It was broken up and fractured by impacts on the lunar surface, just like the surrounding soil.

"I think the most reliable information here is that the material is relatively dark. It appears to have brighter material embedded within the larger, darker regions, although there is a chance that is light glinting off a smooth surface," Moriarty told Space.com, adding that the material is likely heterogeneous in composition.

The image also gives an idea of the origin of the substance. Moriarty said the material may have been excavated by the crater-forming impact or it may be a breccia, containing highlands crust, glass, impactor material and basalts from the volcanic "seas" known as mare. "But we're definitely looking at a rock," Moriarty concluded.

Yutu 2 has been making its way west from the Chang'e 4 landing site, which is situated within the roughly 110-mile-wide (180 kilometers) Von Kármán Crater. On July 28, during Lunar Day 8 of the mission, the rover came across a crater about 6.5 feet (2 meters) in diameter containing a material deemed to have an unusual color and luster.

The initial discovery was made by a Yutu 2 drive team member checking images from the rover's main camera. The drive team consulted lunar scientists, resulting in the decision to postpone plans to have Yutu 2 continue west and instead order the rover to check out the strange material.

Our Space, which announced the findings on Aug. 17, used the term "胶状物" ("jiao zhuang wu"), which can be translated as "gel-like." This description sparked wide interest and speculation among lunar scientists.

The first images of the crater and its contents came from an obstacle-avoidance camera. These images did not, however, have a high resolution, and they included colored shapes likely related to Yutu 2's science instruments, further obscuring the material.

Yutu 2 made a number of approaches to the material to analyze it using the rover's Visible and Near-Infrared Spectrometer (VNIS), which detects light that is scattered or reflected off materials to reveal their makeup.

The small adjustments in orientation and roving tested the rover and its team, with the danger that Yutu 2 could fall into and become stuck in the crater. The movement of the sun across the sky also altered shadowing and affected results.

A second set of measurements, taken in August, was apparently more successful than the first, but results from VNIS have not been announced.

Yutu 2 has driven a total of 950 feet (289 m) across 10 lunar days. Yutu 2 and the Chang'e 4 lander power down to hibernate during the roughly two-week-long lunar nights, when temperatures can drop to as low as minus 310 degrees Fahrenheit (minus 190 degrees Celsius).

Sunrise over the landing site in Von Kármán Crater occurred Oct. 21; Yutu 2 will wake for Lunar Day 11 on Oct. 22, and the lander will do so about 24 hours later.