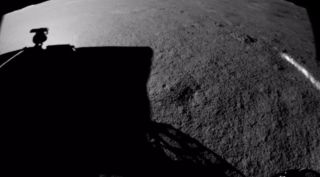 HELSINKI — The Chang'e-4 lander and Yutu-2 rover resumed science and exploration activities June 27 for the start of the mission's seventh lunar day on the far side of the moon.

The 140-kilogram Yutu-2 (Jade Rabbit-2) rover awoke at 1:26 a.m. Eastern, followed by the lander at 9:45 p.m., with both spacecraft and their science payloads working normally, according to an update from the Lunar Exploration and Space Program Center of the China National Space Administration issued Thursday.

The spacecraft had powered down on the morning of June 9, folding solar arrays in preparation for the 14.5-Earth-day-long lunar night, during which the pair use radioisotope heater units to protect against temperatures as low as minus 190 Celsius (minus 310 Fahrenheit).

According to a 'Yutu-2 driving diary' published June 27 (Chinese), the rover had suffered issues during lunar day six which caused interference with communications between the Yutu-2 rover and the Queqiao ("Magpie Bridge") relay satellite, stationed around the second Earth-moon Lagrange point to facilitate communications between ground stations and the spacecraft on the far side of the moon, which never faces the Earth.

The issue meant a loss of telemetry and contact with Yutu-2. Analysis indicated an error caused by a cosmic ray striking a rover microchip and the issue was resolved successfully, according to the article, adding that the incident was a reminder that the space environment is complex and variable.

Mission scientists with the Key Laboratory of Lunar and Deep Space Exploration under the Chinese Academy of Sciences had not responded to a request for comment at press time.

Cosmic rays, high-energy atomic fragments originating beyond the solar system, have caused issues for numerous spacecraft, including NASA's Mars rovers and the Dawn spacecraft which visited asteroids Ceres and Vesta.

The Yutu-2 rover had driven a total of 212.99 meters in Von Kármán crater within the South Pole-Aitken Basin by the end of lunar day six, heading west from the 'Statio Tianhe' landing site.

Philip Stooke of the Centre for Planetary Science and Exploration at the University of Western Ontario, Canada, has plotted a map of the rover's driving, using accurate data released by China for days 1-3, and a tentative route for days 4-6 derived from images and tracks released in official updates.

Images released by the NASA Lunar Reconnaissance Orbiter Camera (LROC) team June 28 show the progress of Yutu-2 across lunar days up to June 3. Tracks from the rover are visible in some images, matching closely to the map above. Based on the visible tracks, the LROC team put the rover's traverse progress at 186 meters up to the middle of lunar day 6, somewhat shorter than the figure released by China.

Chang'e-4 made the first-ever soft-landing on the far side of the moon on Jan. 2, 2019, and has since been carrying out science objectives with a Low-Frequency Spectrometer and Lunar Lander Neutrons and Dosimetry experiment aboard the lander, and a Lunar Penetrating radar, Visible and Near-Infrared Imaging Spectrometer, Advanced Small Analyzer for Neutrals, and Panoramic Camera on the Yutu-2 rover.

In May a paper published in Nature laid out potential evidence of the detection of material originating within the lunar mantle, based on early visible and near infrared spectrometry measurements taken by the rover.

The Chang'e-4 spacecraft have been operating on the lunar far side for 175 days. Yutu-2 has passed its design lifetime of three months, but Liu Dianfu of the Beijing Institute of Spacecraft Environment Engineering expressed hopes late March that the rover can operate for at least one year.

The lander has a design lifetime of one year. However the Chang'e-3 lander, on which Chang'e-4 is based, is understood to still be functioning with one payload after landing in Mare Imbrium in December 2013.