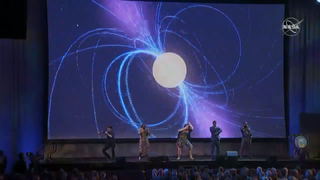 Sometimes when you attend a space conference, you end up singing along to "A Whole New World."

In a twist that, truly, no one expected, performers surprised the crowd today (Oct. 21) at the 2019 International Astronautical Congress (IAC) in Washington, D.C. with show tunes, spoken word, dance and musical theater performance.

In the opening ceremony of the program and then following speeches by presenters including International Astronautical Federation (IAF) President Jean-Yves Le Gall, performers surprised a room full of space enthusiasts, policymakers, members of the media, aerospace engineers and more with musical theater. The morning of fantastical song and dance preceded Vice President Mike Pence's address to the IAC crowd — a strange but delightful juxtaposition.

LIVE NOW: Watch the #IAC2019 opening ceremony as @VP Mike Pence, chairman of the National Space Council, kicks off a week of events dedicated to pushing forward the next era of space exploration. Tune in: https://t.co/noV6U4bMKKOctober 21, 2019

The performances included renditions of "A Whole New World," from the movie "Aladdin," "Aquarius" from the 1967 musical "Hair," "Giants in the Sky" from the 2014 musical film "Into the Woods," "Pure Imagination" from the 1971 film "Willy Wonka & the Chocolate Factory," "Shining Star" from the band Earth, Wind & Fire, and more by a quintet of performers from Broadway and a group of local highschoolers from the the Young Artists of America program.

You can watch a replay of the opening ceremony above in a tweet from NASA Administrator Jim Bridenstine.

The Young Artists of America additionally performed a theatrical piece about "innovation hall," in which they talked about all of the different technologies to come from space exploration programs.

Now, aside from "innovation hall," the pieces performed didn't seem directly related to space (no, there was no "Life on Mars" tribute). However, the varied and unique dance, musical and theatrical performances took place in front of a large screen that showed a changing assortment of space-themed images.

This week, from Oct. 21-25 people from all over the world gathered in Washington, D.C. for the 70th annual IAC. This year's event will focus on the future of space within the context of the recent 50th anniversary of the Apollo 11 lunar landing.

"As a nation we invite the world to commemorate that 'one giant leap for mankind' and celebrate the international accomplishments and partnerships that have become the hallmarks of space exploration," IAC's website reads.

The site doesn't mention anything about theater, singing or dancing. However, the performances at IAC today might identify the overlap between people in the space sector and musical theater fans.