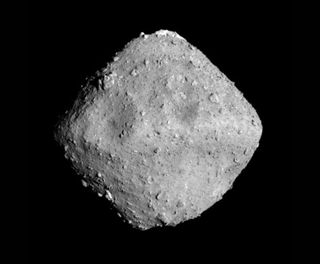 Scientists looked at the boulders found on near-Earth objects Ryugu and Bennu to glean information about the way rocks have moved on the surface of these asteroids over time.

Ryugu is the apple of Hayabusa2's eye — the 3,000-foot-wide (900 meters) asteroid is being studied by the Japanese mission, which gathered close-up pictures and even released a European lander to Ryugu's surface. Hayabusa2 reached Ryugu in late June 2018.

Both Ryugu and the asteroid target of NASA's OSIRIS-REx mission, the 1,640-foot-wide (500 meter-wide) Bennu, are diamond-shaped: their poles are distinct and the asteroids appear to bulge at the waist.

Now that spacecraft are looking at these objects up close, scientists have an opportunity to understand these asteroids' histories better than ever before.

Researchers Bin Cheng, Yang Yu and Hexi Baoyin created a presentation for the 2019 International Academy of Astronautics Planetary Defense Conference, which ran from April 29 to May 3. During the 12-minute presentation titled ''The boulders on asteroid surface: clues to the formation history of the top-shaped morphology,'' the audience learned about the team's simulations. The research combined modeling with new data from the two asteroid missions, and the result was a set of simulations in which a 90-degree, quarter-segment of an asteroid was filled with over 2 million points that would move as 1-meter length particles of the asteroid's surface material, or regolith.

To see how the grains moved and shaped the overall global structure of these asteroids, the team accounted for YORP, a phenomenon that affects an asteroid's rotation rate and pole orientation. (YORP is an abbreviation of the four scientists who built on each other's work to study asteroid motion.)

Cheng, Yu and Baoyin think the rocky slabs that pop in images of Bennu and Ryugu are too large to have been displaced by any impact event. Instead, the researchers suspect these boulders are likely part of the original asteroid body and that their motion across the surface evolves alongside the morphological changes to the regolith's layer formation.

The diamond-shaped asteroids get their form as regolith sloshes down from the midlatitudes toward the equator, researchers found. The poles have more cliff formations and regolith stability, suggested by the fact that boulders are usually found here and not slipping away. The low distribution of boulders near the equators is a sign that the regolith is burying the boulders as it collects in this region, the researchers said. Between the poles and the equator, boulders are found peeking out of the asteroid dust, having traveling some length but not all the way covered.

OSIRIS-REx and Hayabusa2 have impressive missions preceding them, like the European Space Agency's Rosetta mission to Comet 67P/Churyumov-Gerasimenko. Rosetta, which ended in 2016, also found boulder movement and cliff collapse on this comet, not unlike the two current asteroid missions.