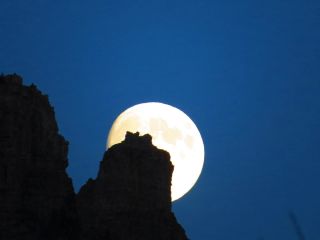 We usually associate the term "Blue Moon" with a month containing two full moons. Nothing of that sort happens this month, and yet May 18 brings a Blue Moon nonetheless — at least according to rules drawn up by an almanac's editor nearly a century ago.

A couple of months ago, I wrote about why Easter 2019 should have fallen in March as opposed to April, based on astronomical considerations.

This year, the vernal equinox occurred at 5:58 p.m. EDT (2158 GMT) on March 20, followed less than 4 hours later by a full moon — officially the first full moon of spring.

Related: What Is a Blue Moon?

However, ecclesiastical rules do not recognize spring arriving any earlier than March 21. So Easter, a feast day that is celebrated on the first Sunday after the first full moon of spring, was delayed until after the following full moon, on April 19.

And now, here comes another unusual artifact of that near coincidence of the vernal equinox and the March full moon: This Saturday brings us the May full moon, and it will be a Blue Moon.

But wait a minute, you may ask — isn't a Blue Moon defined as the second full moon that occurs during a calendar month? The full moon on the 18th is the only full moon this month. So how can we call it a Blue Moon?

Yet, it indeed is a Blue Moon, but only if we follow what is now a somewhat obscure rule. This rule was actually the original definition for branding a full moon as blue.

Back in the July 1943 issue of Sky & Telescope magazine, a question-and answer-column referenced the term Blue Moon. The unusual term was cited from a copy of the 1937 edition of the now-defunct Maine Farmers' Almanac.

The almanac page for August 1937 gave a calendrical meaning for the term Blue Moon. That explanation said that the moon "usually comes full 12 times in a year, three times for each season." Occasionally, however, there will come a year when there are 13 full moons during a year, not the usual 12. "This was considered a very unfortunate circumstance," the almanac continued, "and it upset the regular arrangement of church festivals. For this reason, 13 came to be considered an unlucky number."

And that extra full moon also meant that one of the four seasons would contain four full moons instead of the usual three. When a particular season has four moons, the third was apparently called a Blue Moon so that the fourth and final one could continue to be called the late moon.

So, where did we get the "two full moons in a month rule" that is so popular today?

Once again, we must turn to the pages of Sky & Telescope. This time, on Page 3 of the March 1946 issue, James Hugh Pruett wrote an article, "Once in a Blue Moon," in which he referenced the term Blue Moon and the S&T article from July 1943. Pruett unfortunately came to this conclusion:

"Seven times in 19 years there were — and still are — 13 full moons in a year. This gives 11 months with one full moon each and one with two. This second in a month, so I interpret it, was called Blue Moon."

Pruett's 1946 explanation was, of course, wrong, and it might have been completely forgotten were it not for Deborah Byrd's use of it on her popular NPR program "StarDate" on Jan. 31, 1980. Over the next decade, Pruett's misinterpretation gained traction with a new audience of baby boomers, and today, his "two full moons in a month rule" is recognized worldwide.

Meanwhile, the original Maine Farmers' Almanac rule had been all but forgotten.

As was noted earlier, that publication has long since gone out of business. You should not confuse it with the Farmers' Almanac, which has been publishing continuously since 1818 — but coincidentally also happens to be based in Lewiston, Maine.

That means that for much of North America, the moon will be just past full phase — actually a waning gibbous moon — when it comes over the horizon at nightfall. Of course, this moon will still look full to everyone who sees it, even though it will be ever-so-slightly past perfect roundness.

And don't expect to see the moon shine with a bluish tint. In the past, very unusual atmospheric circumstances have caused the moon (and the sun) to appear bluish, caused by aerosols injected into the atmosphere, such as volcanic ash and dust (after the eruption of the Krakatoa volcano in August 1883) or airborne soot from forest fires (such as from western Canada in September 1950). But nothing out of the ordinary has occurred in recent days or weeks, so this weekend's moon should look pretty much the color we are accustomed to seeing.

Here at Space.com, we have posted many stories regarding the differences between the two Blue Moon definitions over the years. And as it turns out, the last time we had a Blue Moon based on the "four full moons in a season" rule was also in May ... of 2016.

Consider this column an updated version for 2019.

So, when are the next Blue Moons after this Saturday?

If you go by the Pruett "two full moons in a month rule," the next Blue Moon will also be a spooky one of sorts: It will happen on Halloween (Oct. 31), 2020. But if you still go by the old "Maine Almanac rule," that won't happen again until Aug. 19, 2024, which will bring the third full moon of four during the summer of that year.

Maybe it's just one or maybe it's both. We leave the final decision to you.

Editor's note: If you snap an amazing photo of the Blue Moon of May 2019 and would like to share them for a story or photo gallery, send images and comments to spacephotos@space.com!