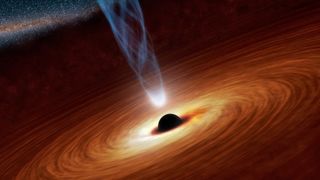 An artist's depiction of a black hole.
(Image: © NASA/JPL-Caltech)

Paul M. Sutter is an astrophysicist at The Ohio State University, host of Ask a Spaceman and "Space Radio," and author of "Your Place in the Universe." Sutter contributed this article to Space.com's Expert Voices: Op-Ed & Insights.

In fact, "like" is far too weak of a word. As far as we can tell (and we've worked really, really hard to check), information is neither created nor destroyed: information throughout the universe simply persists.

First, we need to decide what we mean by "information" and why it ought to be preserved. Physics is ruled by determinism: we can use the laws of physics to predict the future behavior of a system. That's kind of the entire point of physics. Whether it's a particle sitting in a box or a complex chemical reaction or the whole entire universe, our knowledge of physics allows us to make firm, reliable predictions that take our knowledge from the present into the future.

And that same technique allows us to dig into the past. If we know all there is to know about a system, then the same laws of physics that extend into the future also extend into the past — we can run the clock forward or backward, seeing how that system has behaved or will behave with equal ease.

It's this reversibility that allows us to make the leap that information is preserved. If I know everything there is to know about a system — the positions and velocities of all the particles, their spins and electric charges, and all the other stuff — then the laws of physics tell me how all those particles will behave past and future. Thus the raw information of the system — everything there is to know about it — is preserved across time; it just gets rearranged, not created or destroyed.

At first glance black holes seem to treat information innocently enough. Stuff falls into black holes, along with their information. From the point of view of an external observer (i.e., us watching safely from a distance), nothing ever falls into a black hole — it just gets pasted onto the surface (of course it’s a little more complicated than that, but that’s enough to understand the current dilemma). That situation isn't that big of a deal for information, which is neither created nor destroyed.

Except when the black hole evaporates, which creates a tiny problem.

That means that the amount and temperature of the radiation emitted depends only on the mass, spin and charge of the black hole. Nothing else: No matter what you throw into a black hole, from books to cats to spaceships, its Hawking radiation will stay the same.

New physics to the rescue

We don't have a resolution to the black hole information paradox, but that hasn't stopped starry-eyed theorists from dreaming up a host of potential solutions over the decades.

Maybe, for example, information is preserved after all. Although this may seem like a simple statement, it involves rewriting almost all known physics. And black holes are the only places where we've run into trouble with this whole information-preserving thing, so is it really worth reinventing all our physical knowledge just to accommodate this one special case? And yet, we've had to rewrite all of physics before, so it's not like it would be the first time, and black holes are very compelling objects.

Or maybe Hawking radiation isn't all it's cracked up to be. Maybe somehow the information stuck to the surface of the black hole does end up threading its way into the emitted radiation. Maybe Hawking's original analysis was too simple, and by careful observations of the radiation we could painstakingly reconstruct the books and cats and spaceships that fell in. While this would rescue all of known physics, nobody has been able to find a satisfactory way to actually, you know, make this happen.

Perhaps information doesn't get stuck to the surface, but instead is left behind in some sort of crunchy nugget just as the black hole finishes evaporating. That sounds lovely, but again, we have little to no idea of how this would actually work. Or maybe it's something even wilder, like the information getting funneled into another universe or looping back in time.

What's exciting about this paradox is that all of the potential answers lead to new physics. No matter what, if we resolve the paradox, we'll do so by learning something new about the universe.

Learn more by listening to the episode "What is the black hole information paradox?" on the Ask A Spaceman podcast, available on iTunes and on the Web at http://www.askaspaceman.com. Thanks to Peter G. for the questions that led to this piece! Ask your own question on Twitter using #AskASpaceman or by following Paul @PaulMattSutter and facebook.com/PaulMattSutter. Follow us on Twitter @Spacedotcom and on Facebook.