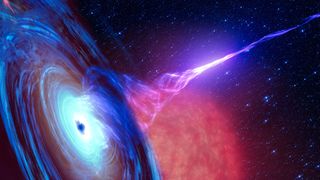 Black holes are gravitational monsters, squeezing gas and dust down to a microscopic point like great cosmic trash compactors. Modern physics dictates that, after being consumed, information about this matter should be forever lost to the universe. But a new experiment suggests that there might be a way to use quantum mechanics to gain some insight into the interior of a black hole.

"In quantum physics, information cannot possibly be lost," Kevin Landsman, a physics graduate student at the Joint Quantum Institute (JQI) at the University of Maryland in College Park, told Live Science. "Instead, information can be hidden, or scrambled" among subatomic, inextricably linked particles.

Landsman and his co-authors showed that they could measure when and how quickly information was scrambled inside a simplified model of a black hole, providing a potential peek into the otherwise impenetrable entities. The findings, which appear today (March 6) in the journalNature, could also help in the development of quantum computers. [Stephen Hawking's Most Far-Out Ideas About Black Holes]

Black holes are infinitely dense, infinitely small objects formed from the collapse of a giant, dead star that went supernova. Because of their massive gravitational pull, they suck in surrounding material, which disappears behind what's known as their event horizon — the point past which nothing, including light, can escape.

In the 1970s, the famous theoretical physicist Stephen Hawking proved that black holes can shrink over their lifetimes. According to the laws of quantum mechanics — the rules that dictate the behavior of subatomic particles at tiny scales — pairs of particles spontaneously pop into existence just outside a black hole's event horizon. One of these particles then falls into the black hole while the other is propelled outward, stealing a tiny smidgeon of energy in the process. Over extremely long timescales, enough energy is pilfered that the black hole will evaporate, a process known as Hawking radiation, as Live Science has previously reported.

In their new experiment, Landsman and his colleagues showed how to get some relief for this issue using the outward-flying particle in a Hawking radiation pair. Because it is entangled with its infalling partner, meaning its state is inextricably linked to that of its partner, measuring the properties of one can provide important details about the other.

"One can recover the information dropped into the black hole by doing a massive quantum calculation on these outgoing [particles]," Norman Yao, a physicist at the University of California, Berkeley, and member of the team, said in a statement.

The particles inside a black hole have had all their information quantum-mechanically "scrambled." That is, their information has been chaotically mixed together in a way that should make it impossible to ever extricate. But an entangled particle that gets jumbled up in this system could potentially pass information to its partner.

Doing this for a real-world black hole is hopelessly complicated (and besides, black holes are hard to come by in physics labs). So the group created a quantum computer that performed calculations using entangled quantum bits, or qubits — the basic unit of information used in quantum computing. They then set up a simple model using three atomic nuclei of the element Ytterbium, which were all entangled with each other.

Using another external qubit, the physicists were able to tell when particles in the three-particle system became scrambled and could measure how scrambled they became. More importantly, their calculations showed that the particles were specifically scrambled with each other rather with other particles in the environment, Raphael Bousso, a UC Berkeley theoretical physicist who was not involved in the work, told Live Science.

"It's a wonderful accomplishment," he added. "It turns out that distinguishing which of these things is actually happening to your quantum system is a very difficult problem."

The results show how studies of black holes are leading to experiments that can probe small subtleties in quantum mechanics, Bousso said, which could become helpful in the development of future quantum-computing mechanisms.