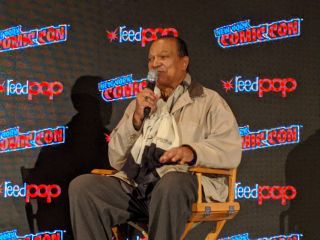 NEW YORK — Today (Oct. 4) at the 2019 New York Comic Con, Billy Dee Williams, most famously known for his role as Lando in the "Star Wars" film series, revealed how he feels about real-life human spaceflight.

Williams, who will return as Lando after 36 years in "Star Wars: Episode IX," took the stage to chat with an adoring crowd of fans and answer questions about everything from his work as a painter to how he feels about our possible future on Mars.

When Space.com asked Williams, whose "Star Wars" character Lando famously piloted the Millenium Falcon, about humanity getting closer to actually flying to another planet, he replied, "it's a wonderful great idea, I guess."

"But we have a lot of work to do here on this planet Earth, and we don't want to take all of that pathology all the craziness out there into space and to another planet," he said.

In addition to this concern that we might just end up taking the problems that we have on Earth to another planet, Williams added that "physiologically, I think we're gonna have to make huge adjustments before we can start traveling like that through space."

"I would say, let's work with this wonderful beautiful planet that we live on," he added.

But, while Williams has some reservations about the future of human spaceflight and current efforts to reach Mars, both how we might accomplish these goals and what the ethical repercussions of inhabiting another planet are, he thinks that this exploration is just a part of our human nature.

"it is part of our DNA," Williams said. "We want to explore, it's part of who we are. So I think, eventually, we'll be out there, doing all this craziness that we do here."

Currently, there are a number of programs that are working to push us closer to returning to the moon and landing humans on Mars. NASA's Artemis program, for instance, aims to land the first woman and the next man on the moon by 2024 using both internal efforts and collaborative partnerships with commercial spaceflight companies.

Additionally, Elon Musk recently revealed SpaceX's MK1 Starship which is part of the company's efforts to create a vehicle that humans can fly to Mars.