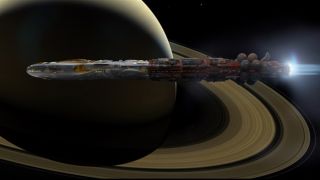 Avenue 5 concept imagery for a 2-mile space cruise ship at the heart of of HBO's space comedy.
(Image: © HBO)

You wouldn't want to book a ticket on the Avenue 5, the luxury space cruise ship at the heart of HBO's new limited space comedy series. But if you did, at least you'd ride in style.

That's largely due to the vision of production designer Simon Bowles, who worked with series creator Armando Iannucci  ("Veep") and a set decorating team to create the look of perhaps the the most luxurious cruise ship in space of all time.

"On this project, I could see there was a wonderful opportunity to really kind of pull about the two worlds that the passengers and the crew inhabit on Avenue 5," Bowles told Space.com in an interview. "For the beautiful, futuristic part of the ship ... it's computer engineered so that every curve, every small detail is so considered with the aesthetics in mind, but also, I really wanted to keep it within the realms of science as much as possible."

Avenue 5 concept imagery for a 2-mile space cruise ship at the heart of of HBO's space comedy.

The Atrium of Avenue 5, an opulent cruise ship in HBO's space comedy.

The dining area of Avenue 5 where you can order a Judd Light beer.

The faux bridge of Avenue 5 is a sleek piece of sci-fi. But the real controls are in the lower decks.

The conference room of Avenue 5 features a colossal wood table and paneling.

The Judd Corporation's logo is front and center in a wall light by Porta Romana.

Set 40 years in the future, "Avenue 5" chronicles the ill-fated voyage of a space cruise ship across the solar system after its eight-week trip to Saturn veers wildly off course. Its two-month voyage will now last years, stranding thousands of passengers and crew who just want to get home.

"Avenue 5" debuted on HBO Jan. 19 and is in the home stretch of its nine-episode run, with episode eight airing tonight (March 8). It stars Hugh Laurie as Captain Ryan Clark, who is play-acting at command of the titular space liner; Josh Gad as the eccentric Herman Judd, the billionaire owner of "Avenue 5"; Lenora Crichlow as Billie McEvoy, the ship's second engineer; and a host of other characters who have to work together (in space and on Earth) to survive.

But the "Avenue 5" itself is as much a star as the show's human actors. According to Bowles, the ship is vast — about 2 miles long (3 kilometers). It has a definite "Upstairs, Downstairs" feel to it when it comes to the glitzy, luxurious passenger areas and the seedy lower decks for the ship's actual crew. The ship, he explained, likely started off as a huge transport ship for cargo, with luxury spaces like staterooms, a vast windowed promenade, restaurants (and yes, a golf course), added over time.

"And that's why this ship is so dirty and grungy," Bowles said of the lower decks. "So, when they're moving through the rear section of the ship, they're having to step over things, or duck because of this huge I-beam ... whereas in the passenger, its very open there, and opulent."

All of the sets were designed with 3-D models first, then explored with Oculus Rift before being fabricated through 3-D printing, Bowles said. In all, the design team came up with 50 or 60 different sets.

Some of "Avenue 5's" gritty spacecraft design is inspired by reality, with Bowles drawing on a tour about 15 years ago of the Russian space agency's Star City cosmonaut training center and its space station mockups to add a sense of history to the show's actual spaceflight controls.

"I spent time and met with cosmonauts over there, and I've been to their flight control [center]," Bowles said, adding that he was struck by the relatively low-tech, "very manual way of interacting with space" of Russia's space agency at the time.

"The looks of the lower decks section, where the actual crew is underneath the kind of glitzy part, was really reminiscent of what it was like on the Russian segment of the station," he added.

The spacesuits of Avenue 5, too, have a used look to them, as if countless astronauts have donned and doffed them over the years to maintain the ship.

Here's a look at how Simon Bowles' amazing designs made the leap from page to screen on "Avenue 5". Here are Bowles' renderings of the cavernous atrium for passengers.

The atrium is a vast meeting center dominated by a massive window port looking out into space.

The dining area is on an upper level of the atrium on Avenue 5. Up next is a look at this view from the show's set.

The dining area set from Avenue 5. The marble paneling, gold trim and gold elements are hallmark of the Judd Galactic experience.

A view of the main atrium set, all set for yoga class, after final construction for HBO's "Avenue 5."

Simon Bowles imagined the conference room of Avenue 5 as if it was carved from a giant tree and then hauled into space.

The lower decks on the Avenue 5 lack the luxurious opulence of the passenger section. Here is an early rendering of the main control room.

And the final set of the lower decks, literally located just below the faux bridge, which is crewed by actors.

Bowles also researched real-life space mission control centers to help shape the Mission Control for Avenue 5. In addition to Russia's flight control center, he looked to NASA's Mission Control Center in Houston, views of the private flight control center SpaceX has for its Dragon vehicles in California and even China's massive Traffic Control Center in Beijing for inspiration. In the end, he opted for a circular design with the flight director (Rav Mulcair portrayed by Nikki Amuka-Bird) at its center.

"Normally, in those kind of spaces, everybody's facing towards the screen, you know, or an array of screens," Bowles said. "So I really knew that I wanted something like totally different."

The podium that Mulcair can use actually rotates to face different parts of the flight control room, and can even rise up. Bowles imagines that Avenue 5's billionaire owner Herman Judd might use the podium as sort of throne to speak down to his employees. "I thought it'd be hilarious because this whole thing has to be the center of attention."

And speaking of Judd, his logo is everywhere on Avenue 5. It's on the beer, the walls, on digital screens and even in the lighting displays, with dozens of tiny "J" symbols spread out in different patterns. In the ship's comedy club, every brick on the stage's backdrop has the Judd logo on it, just because.

"You don't see them so much, but yeah ... everything has got to be branded with that guy's logo," Bowles said, adding that designing Judd's brand was a lot fun. He imagines a backstory where Judd employees had to decide how much branding was enough.

"It's the people who are doing the interior design and graphic design for him, for the Judd Corporation," Bowles said. "They think they're doing the right thing by putting his name out there. It may not even be an egotistical thing for him."

The luxury of Avenue 5 goes beyond passenger spaces. It also includes food. Here, the Judd logo and Avenue 5 appear in ship food.

And here are Avenue 5's luxury tablets and other decorations and features for passengers to enjoy.

Season 1 of "Avenue 5" is nearly at an end, but years remain before the ship's passengers and crew will reach Earth. So it's no surprise HBO has renewed the series for a Season 2.  What types of design surprises await for viewers in that new season?

"Oh, this is a tricky question, because I'm looking at all the visuals for the next season," Bowles said, but he let no secrets slip. Instead, he promised that Iannucci and he hope to find new parts of the ship to explore.

"You know, who wants to go back and keep on retreading old ground? We want to go into new places," Bowles said. "That's why we wanted the ship to be very large, so that we can, every season, explore whole new exciting places and spaces within the ship."

Bowles added that he was grateful viewers connected with "Avenue 5" to make a second season happen.

"There's these wonderful kind of creative opportunities for the next season and beyond that that can be so exciting," he said. "I can't wait to share it with everybody."