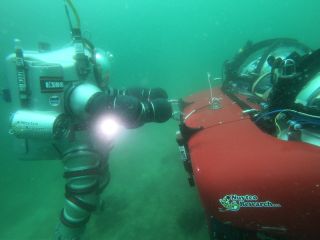 In NASA's NEEMO NXT mission, astronauts trained underwater off the coast of California with the commercial ExoSuit and a mini submarine from Aug. 21 to 28, 2019.
(Image: © NASA)

Astronauts just resurfaced from a trip to the bottom of the ocean where they tested retro futuristic spacesuit and submarine tech.

From Aug. 21 to 28, 2019, NASA astronaut Drew Feustel, ESA astronaut Thomas Pesquet and Japanese astronaut Norishige Kanai took part in a new NASA Extreme Environment Mission Operations (NEEMO) mission off the coast of California in the U.S. This mission tested the kinds of underwater training methods that might be best to use for training the next astronauts to land on the moon. The mission, hosted by the University of Southern California's Wrigley Institute, is known as NEEMO NXT.

In previous NEEMO missions, "aquanauts" have spent time in the underwater Aquarius base off the coast of Florida. But with this mission, the team resurfaced every day. The mission focused on technology and underwater tests of the commercial ExoSuit, with the help of a team of divers and land-based support.

The team tested the suit — which is visually reminiscent of those seen in the early days of science fiction — for its dexterity and potential viability for use in analog missions, or missions that mimic the activities that might take place on places like the moon or Mars. The suit was tested alongside a mini submarine, which simulated a pressurized rover, a vehicle that may accompany astronauts on future crewed missions.

"With these analogue missions everything is made to be as realistic as possible without leaving Earth, so we will be as busy as astronauts on the Space Station, using similar operational techniques with mission control, briefings and procedures," Pesquet said in an ESA statement.

The astronauts also tested the location itself to see if it would be a suitable analog for the environment on the moon. If so, astronauts training to launch to the lunar surface might spend portions of their time underwater working at this site.

There are obvious differences between the moon's surface and the Pacific Ocean. However, there are some geological similarities, and the site provides aquanauts with the experience of doing field work in a real-time, high-pressure, difficult environment where things could go wrong unexpectedly, according to the statement.