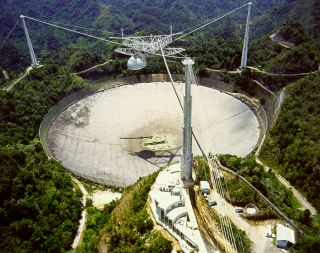 HONOLULU — Staff at Puerto Rico's iconic Arecibo Observatory are monitoring the facility for potential damage in the midst of a spate of earthquakes rocking the island.

The strongest of those quakes was a 6.4 temblor early in the morning of Tuesday (Jan. 7). An initial survey conducted by drone after that event found no damage to the massive radio dish or the equipment above it, an Arecibo Observatory representative said here at the 235th meeting of the American Astronomical Society on Tuesday (Jan. 7).

However, safety protocols mean that observatory personnel can't examine the dish or its accessories until the ground stops shaking, and it's difficult to predict when that will happen.

Related: A Radar Station in Puerto Rico Can See Ice on Mercury

The earthquake swarm arrived just as Arecibo Observatory was preparing to embark on a year full of repairs to damage caused by Hurricane Maria, which battered Puerto Rico in 2017. The observatory has been conducting science work in the wake of the storm, but the new data has not been of the same quality as that gathered before the hurricane.

Then, on Dec. 28, 2019, the ground started shaking. According to a statement released by the U.S. Geological Survey, the area has experienced more than 30 earthquakes of magnitude 4 or stronger since that date; the same time period has subjected the region to more than 500 smaller shakes. The agency added that the federal government repaired earthquake sensors after Hurricane Maria and has also shipped more detectors to the island since the swarm of quakes began.

Arecibo Observatory is one of the key facilities in the U.S. for monitoring nearby asteroids. That work relies on shooting such space rocks with a radar beam, then measuring the light that bounces back. Such observations can tell scientists about an asteroid's size, shape and composition, giving planetary defense experts a better sense of whether the rock poses a collision risk.