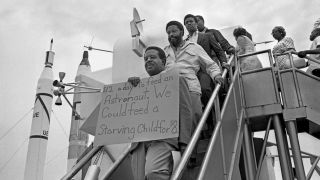 All told, the U.S. spent $25 billion in 1960s money on the Apollo program — and plenty of Americans believed there were more pressing needs that funding could have addressed.

On the eve of the Apollo 11 launch, hundreds of demonstrators arrived at NASA's Kennedy Space Center to make just that point. Members of the Poor People's Campaign, the same group that had marched on Washington in 1968 led by Martin Luther King, Jr., arrived with a pair of mule-drawn carts. Their leader, Ralph Abernathy, asked to meet with NASA administrator Thomas Paine, who agreed to talk to him on July 15, the day before launch.

"[Abernathy said he believed that] a great nation ought to be able to take care of those who are less fortunate as well as undertake space exploration," Roger Launius, former historian at NASA, told Space.com. "He says, 'I think it's misplaced priorities.' He had a really good point there."

Abernathy explained that while he was proud of the Apollo accomplishments, he wanted to draw attention to the 20% of Americans who couldn't afford to meet basic needs like food, clothing or housing. He asked Paine to let some of the protestors watch the launch, and asked that NASA provide support and technical aid to combat poverty.

Paine agreed to all three requests, according to a memo he dictated after the meeting, which Launius found when reading through the administrator's papers. "I stated that if we could solve the problems of poverty in the United States by not pushing the button to launch men to the moon tomorrow, then we would not push that button," Paine wrote.

But Paine emphasized the challenges as well. "I said that the great technological advances of NASA were child's play compared to the tremendously difficult human problems with which he [Abernathy] and his people were concerned," he wrote. "I said that he should regard the space program, however, as an encouraging demonstration of what the American people could accomplish when they had vision, leadership and adequate resources of competent people and money to overcome obstacles."

"I said I hoped that he would hitch his wagons to our rocket, using the space program as a spur to the nation to tackle problems boldly in other areas, and using NASA's space successes as a yardstick by which progress in other areas should be measured," Paine wrote. "I said that although I could not promise early results, I would certainly do everything in my own personal power to help him in his fight for better conditions for all Americans, and that his request that science and engineering assist in this task was a sound one which, in the long run, would indeed help."

Paine made a request of his own: that Abernathy pray for the safety of the three men who, the next day, would climb aboard a rocket and blast into the unknown. Abernathy agreed.

"Everybody I think got what they wanted out," Launius said. "Abernathy wanted to call attention to this, Paine wanted to demonstrate the sympathy that he had and I think he did genuinely have that sympathy." In addition to Paine's memo, the meeting is recorded in reports by a few of the newspapers in town to cover the launch.

The meeting tapped into the tenor of the administration led by President Lyndon B. Johnson, who had left the White House just six months before the Apollo 11 launch. It also reflected the zeitgeist of the time: The first flight around the moon, Apollo 8 wrapped up 1968, a year of social struggles — including King's assassination — and the flight was seen by some as having "saved" the year.

"The Johnson administration was really talking about, 'we've got to declare war on poverty' — and by the way, it's important to note, war on poverty, not war on poor people," Launius said. "In that context, there's a fair amount of activism that is present in society, part of which emerges out of the civil rights crusade that deals with some of these issues as well."

Launius said that spirit of activism was also present at NASA, beginning with Paine's predecessor, James Webb. "NASA had a whole plan to basically make the world a better place by using the methodologies, the tools and the capabilities they developed to go to the moon," he said.

In the course of landing humans on the moon, NASA was forced to tackle mundane logistical challenges like managing transportation, water and waste, Launius added; that work found applications on Earth. Cities adopted the idea of "mission control" as a way to coordinate different types of infrastructure and deal with situations as they unfolded. Solar power, too, got a boost from the space program.

"Criticism on the political left has always been the spending of this money in this particular way, not just for Apollo but for NASA today too," he said. "Wouldn't it be better spent in — name the social program of your choice?"