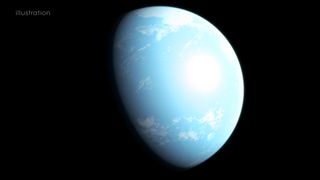 CAMBRIDGE, Mass. — Assuming that alien life will be similar to what evolved here on Earth could severely limit the potential for big discoveries, researchers said.

On Friday (Aug. 2) at the first annual TESS Science Conference here at the Massachusetts Institute of Technology (MIT), a panel of scientists  discussed what's next in the search for signs of life on other worlds — and just how close we might be to finding such signs. (TESS is NASA's Transiting Exoplanet Survey Satellite, which just marked one year of planet hunting in Earth orbit.)

The panel took questions from both the in-house and live-stream audiences about upcoming missions, their theoretical timeline for the first alien-life discovery and the importance of being more flexible in our definition of life in order to fully explore the potential that otherwordly chemistry and biology have to offer.

One of the first questions fielded by the panel concerned the importance of the anticipated NASA missions Habitable Exoplanet Observatory (HabEx) and Large UV/Optical/IR Surveyor (LUVOIR) and what the future of biosignature research will look like if those missions don't go forward.

"HabEx is designed so that we've got a really good chance — over a 95% chance — of taking a spectrum of at least one potentially habitable exoplanet," panelist Shawn Domagal-Goldman, an astrobiologist at NASA's Goddard Space Center in Greenbelt, Maryland, said on Friday.

These concept missions are still waiting to receive the official go-ahead from NASA, but Domagal-Goldman said that even if they aren't prioritized, projects like the Origins Space Telescope could achieve similar scientific goals — just around cooler dwarf stars instead of stars more similar to our own sun.

Astrobiologist and theoretical physicist Sara Walker also emphasized that, regardless of which missions go forward, it will be important to not restrict biosignature research to the kind of chemistry we're accustomed to on Earth.

"As it stands now, at least for me personally, I feel the origin of life itself is too anthropocentric, and we have a tendency to highly design and engineer experiments for specific biopolymers that we think are present in life rather than doing random exploration of chemical space," said Walker, who's based at Arizona State University.

"If, rather, you see what comes out of random chemistries under certain planetary conditions, that starts to feel much more like origins of life to me," she added.

Identifying a more complete range of candidate exoplanets that could harbor life will likely require broadening our definition of the "habitable zone," the panelists said. Traditionally, the habitable zone is defined as the distance an exoplanet can be from its host star such that it has a climate capable of maintaining liquid water on its surface. But, as the panelists discussed, liquid water might not be the only basis for life.

One example of a different solvent that could be used is liquid methane, which is present in abundance on the surface of Saturn's huge moon Titan. Petkowski said that re-creating these alien environments and chemistries in Earth labs is not without its own technical challenges, but it will be an important way to expand our understanding of what conditions are necessary for life to evolve.

So how close are we then to identifying life on other planets? The panelists said it depends on how research progresses over the next few decades.

"I would say we would certainly learn more within 20 years, and we'll get some ideas, hopefully, about prebiosignatures and biosignatures, [but] detecting life is a more distant question because we need very solid data," chemist Rafal Szabla, a postdoctoral fellow at the Polish Academy of Sciences' Institute of Physics, said during the panel discussion.

And even if alien life exists, said astrochemist Paul Rimmer of Cambridge University in England, it might still be 100 years until we can really identify it.

"If it turns out that life, like the life on Earth, is very common, then I think that statistics in the next 30 or 40 years would be good enough to say, 'Out of these 100 or so planets, one of them almost certainly has life,'" Rimmer said during the panel discussion. "If, on the other hand, life is very rare, or life is common but not like what it is we're actually looking for, then I'm much more on Sara Walker's timescale [of 100 years]."

There's another timeline to consider — how long we'll keep looking for life, even if we don't find any encouraging evidence.  We probably don't need to worry about this one, however; if Mars is any indication, Domagal-Goldman said, we'll never stop looking.