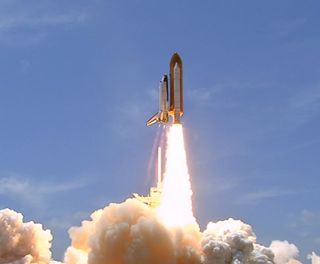 In exchange for buying Boeing jets, Turkey wanted a Turkish astronaut to fly on a NASA space shuttle, according to a classified U.S. State Department message recently released by the organization WikiLeaks.

The leaked cable, published by the New York Times, was written in January 2010 by James Jeffrey while he was U.S. ambassador to Turkey. Jeffrey (now ambassador to Iraq) was apparently urging Turkish Airlines, which is partly owned by the Turkish government, to purchase planes from Boeing rather than its European competitor Airbus.

Turkish Minister of Transportation Binali Yildirim told Jeffrey that while price was the main consideration, Turkey could be swayed by perks, including help getting the budding Turkish space program off the ground – a request that had previously been made by Turkey's president, Abdullah Gul, to President Obama.

"Yildirim hinted obliquely that Turkey's desire to send an astronaut into space -- expressed in a letter from President Gul to President Obama -- is also tied into its consideration of commercial deals, and that NASA assistance to help stand up Turkey's nascent space program would be viewed positively," Jeffrey wrote.

The Turkish minister also requested help from the U.S. Federal Aviation Administration in strengthening Turkey's aviation infrastructure, and said that heightened cooperation between the FAA and Turkey could also help sweeten the deal.

"Yildirim's conflation of interactions [between the United States and Turkey] and what is ostensibly a commercial sale between private firms suggests an unwelcome, but unsurprising, degree of political influence in this transaction," Jeffrey wrote.

He added, however, "While there should not be a link between this deal and FAA/NASA assistance in developing Turkey's aviation and aerospace agencies, such assistance in and of itself could be mutually beneficial and merits further study."

The leaked memo not only revealed the eagerness of Turkey to boost its space and aviation programs, but, taken with other cables released by WikiLeaks, showed the willingness of American diplomats to help broker deals for U.S. businesses.

Jeffrey promised to investigate whether NASA could help the Turkish space program. He "noted that scheduling a Turkish astronaut on an upcoming mission would be extremely difficult, but that other technical assistance from NASA in establishing Turkey's space program might be a possibility."

NASA has carried foreign astronauts on space shuttle flights in exchange for money or other contributions to space projects. For example, Japanese astronauts have flown on U.S. space shuttles (as well as on Russian Soyuz spacecraft), and Israel's first astronaut, Ilan Ramon, was a member of the ill-fated crew of the space shuttle Columbia, which disintegrated in 2003 during re-entry.

Political considerations weigh into the decision to place a foreign astronaut aboard a U.S. space shuttle, but in Turkey's case that may now be moot: Only two or three shuttle flights remain before the fleet is retired this year.

Turkey is not the only country asking for perks in exchange for purchasing Boeing jets. Other leaked documents reveal similar tit-for-tat requests being negotiated behind the scenes by the State Department. For example, the king of Saudi Arabia wanted his personal jet outfitted with technology from Air Force One, and the prime minister of Bangladesh asked the State Department to re-establish landing rights at New York's JFK airport, the New York Times reported.

Ultimately, there is hope for further collaboration in space between Turkey and the United States, Jeffrey wrote.

"We probably cannot put a Turkish astronaut in orbit, but there are programs we could undertake to strengthen Turkey's capacity in this area that would meet our own goals for improved aviation safety in the region."