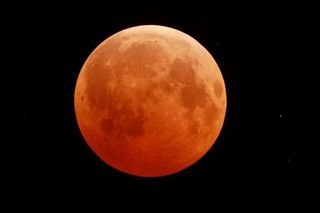 A blood-red moon hung in the black sky on the darkest night of the year last night (Dec. 20).

The total lunar eclipse was the only one this year and the only one in the last 372 years to coincide with the winter solstice in the Northern Hemisphere, which is the longest and darkest night of the year.

Skywatchers around the country got some gorgeous views of the moon, as long as it wasn't obscured by clouds.

"The blue edge to Earth's shadow set against the reddened moon was indescribably beautiful!" Jimmy Westlake, an astronomy professor at Colorado Mountain College in Steamboat Springs, Colo., said of the view moments before the beginning of totality, when the moon is fully engulfed in Earth's shadow. Westlake was viewing this eclipse from near Dublin, Ga. [Westlake's photo]

Westlake also managed to snap a picture of the moon with star constellations behind it. "The totally eclipsed moon was positioned at the feet of the Gemini Twins and near the M35 star cluster," he told SPACE.com.

A total lunar eclipse occurs when the Earth aligns between a full moon and the sun, blocking any sunlight from reflecting off the moon's surface. [Top 10 Amazing Moon Facts]

The color of an eclipsed moon will vary depending on weather conditions, the amount and types of small particulates in the air, and the optical equipment being used (hues tend to be more vivid with the naked eye than in telescopes). The French astronomer Andre-Louis Danjon introduced a five-point scale of lunar luminosity ("L") to classify the color of eclipses, with L=0 being a very dark eclipse with the moon almost invisible, and an L = 4 being a very bright copper-red or orange eclipse. [More photos of past lunar eclipses]

David and Jaime Campbell of Lawrenceville, N.J., and Michael Vagnetti of Brooklyn, N.Y. both wrote to SPACE.com to say they estimated last night's eclipse to be an L=2 on the scale, corresponding to a deep red or rust-colored eclipse.

"I had an excellent view of the eclipse with pretty good darkness conditions," he wrote in an e-mail. "At 0317 Eastern time, I observed probably 95 percent of disk to be dark red in color with a slightly lighter ring as the perimeter."