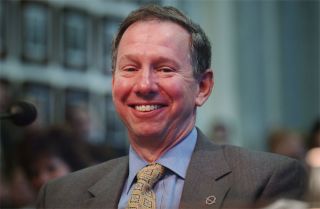 "Thereare going to be some difficult decisions to make and I cannot say otherwise andI would not say otherwise even if I could," Griffin said in his first address as NASAadministrator to the agency's 18,000 employees. The 30-minute talk was carriedlive on NASA television.

"Theday that we lost Columbia was probably the worstday that NASA has had," Griffinsaid. "But out of that accident came a new vision forNASA, a vision of exploration beyond Earth orbit."

Griffin called thevision "exactly the right strategy" for NASA. One that will call forthe agency to change the way it does business, including making field centerscompete for projects and doing more to involve commercial ventures in spaceexploration.

DescribingNASA as an agency "in transition", Griffin said that more changes would beneeded to "reshape" NASA to "head down a new path" that includes returning tothe Moon by 2020 in preparation for eventual human expeditions to Mars.

"It'sgoing to be difficult, and it is going to be hectic but we are going to do ittogether," he said.

Griffin, who wasconfirmed by the Senate Wednesday evening but has yet to be sworn in, spoke forless than 10 minutes before taking questions from the audience at NASAHeadquarters here and via telephone from employees at NASA's regional fieldcenters throughout the United States.

Askedby one employee about NASA's proposed aeronautics spending cuts that are a bigenough concern on Capitol Hill that they momentarily held up what was otherwisea remarkably swift confirmation, Griffinsaid aeronautics research would always be "a core part of the NASAmission" but acknowledged that the program is "hard hit rightnow."

NASAfield centers in California, Ohio,and Virginiaare planning to shed a few thousand jobs in response to declining aeronauticsspending. Griffinoffered no false assurances that those jobs would be saved.

"Idon't see a way to avoid some of the dislocation at present," he said."We do live in a world of limited resources and we do have to setpriorities"

Griffin said hisschedule would be dominated in the weeks ahead by making sure the agency isready to return safely to flight for the first time since the February 2003loss of the Space Shuttle Columbia and her crew.

"Allother commitments will flow around what I have to do to support the return toflight decision," Griffinsaid.

Griffin most recentlyled the space department at Johns Hopkins University Applied Physics Laboratoryand is a veteran aerospace executive who has held a variety of senior-levelpositions at the Pentagon, NASA and in industry.

Griffin said a tourof NASA's field centers is in the works, but assured employees that he is nostranger to the agency and what it does.

"Iknow the agency fairly well," he said." I have been to all of thecenters each and every one of them on many occasions. I know the kind of talentthat we have in this agency and I know what we can do when we set our minds toit."

Althoughmuch has been made of Griffin's half dozenadvanced degrees by the press and lawmakers singing his praises, Griffin invited NASAemployees Thursday to address him by his first name.

"I'mnot 'sir', I'm not 'Dr. Griffin', I'm not anything besides Mike or Michael," Griffin said. "The NASAadministrator is not royalty and I am certainly not. I'm just another person."

Griffin said duringhis Senate confirmation hearing Tuesday that seeing to the space shuttle's safereturn to flight and accelerating the timetable for fielding the spaceshuttle's replacement would be his top two priorities as administrator.