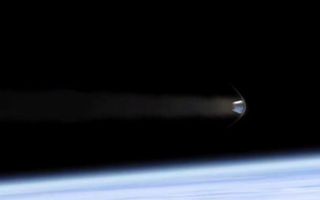 This still from a SpaceX animation depicts an unmanned Dragon spacecraft re-entering Earth's atmosphere ahead of a planned splashdown in the ocean.
(Image: © SpaceX.)

The California-based SpaceX(Space Exploration Technologies) will webcast the static fire test of theFalcon 9 rocket engines here.The webcast is set to begin at 11:00 a.m. EST (1600 GMT), and the test will likely occur after 12:30 p.m. EST (1730 GMT).

The company plans to launch its Dragon spacecraft intolow-Earth orbit atop a Falcon 9 rocket for the first time on Dec. 7. The launchis also the first flight under NASA?s Commercial Orbital TransportationServices program to develop commercial supply services to the InternationalSpace Station. [Illustrationof Dragon re-entering Earth's atmosphere.]

SpaceX has a $1.6 billioncontract with NASA to launch cargo aboard the Dragon capsule to the station.

After NASA's space shuttles retire, SpaceX plans to fly atleast 12 missions to carry supplies to and from the orbital outpost.