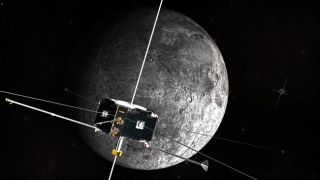 An artist's concept of the ARTEMIS spacecraft in orbit around the Moon.
(Image: © NASA)

Two NASA spacecraft have begun a newmission, switchingtheir focus from Earth's magnetic field to the moon.

This week, the twin unmanned probesbegan studying how the solarwind from the sun electrifies, alters and erodes the moon's surface.Theirobservations may return valuable information for future explorers andgiveplanetary scientists a hint of what's happening on other worlds aroundthesolar system, researchers said.

NASA calls the new mission Artemis,short for Acceleration,Reconnection, Turbulence and Electrodynamics of the Moon?s Interactionwith theSun. Its two spacecraft are recycled from an early multi-probe missionto studythe interactions between Earth's magnetic field and the solar wind. [Illustrationof Artemis probes.]

"Artemis will provide a uniquetwo-point view of themoon's under-explored space environment," Artemis? principalinvestigatorVassilis Angelopoulos of UCLA said in a statement. "These twospacecraftare headed for an incredible new adventure."

From Earth to the moon

The five Themis probes orbited Earth,helping scientistsdetermine how storms in our planet's magnetic field lead to Earth'scolorful auroras ? also known as the northern and southernlights.

Themis completed its primary missionin 2008. The Themisteam then proposed that the two outermost spacecraft use their extrafuel topropel themselves into lunar orbits ? making it the first two-satellitemissionto the moon.

The first Artemis probe settled intoa temporary Lagrangepoint orbit on the far side of the moon on Aug. 25 of this year. Thesecondentered a Lagrange point last week, on Oct. 22.

Lagrangepointsare places where the gravity of Earth and the moon balance, creating asort ofgravitational parking lot for spacecraft.

After six months at the Lagrangepoints, the two Artemisprobes will move closer to the moon. The spacecraft will beapproximately 62miles (100 km) from the lunar surface at first, but will eventuallymovecloser.

Artemis will measure solarwind turbulence on scales never sampled by previous missions,researcherssaid. Solar wind is a stream of charged particles emitted from theupper atmosphereof the sun.

The two spacecraft will look to seehow the solar wind affectsthe moon, a rocky world that has no substantial magnetic field toprotect it.By contrast, Earth's magnetic field shields it to a large extent.

Over the next several years, Artemiswill also helpscientists understand how the Earth's magnetosphere is shaped by thestrongsolar wind at the distance of the moon, researchers said.

"Artemis is going to give us afundamental newunderstanding of the solar wind," said David Sibeck, Artemis projectscientist at NASA's Goddard Space Flight Center in Maryland.

Artemis will work in tandem withcurrent missions ? such asNASA's Lunar Reconnaissance Orbiter, Ladee (Lunar Atmosphere and DustEnvironment Explorer) and Grail (Gravity Recovery and InteriorLaboratory), aswell as China's Chang'e 2 probe ? to prepare the ground for increasedroboticexploration of the moon, researchers said.