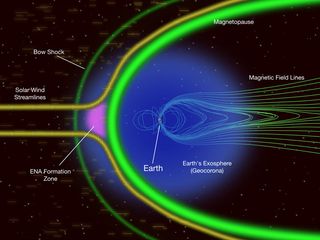 The IBEX spacecraft has found that Energetic Neutral Atoms, or ENAs, are coming from a region just outside Earth's magnetopause where nearly stationary protons from the solar wind interact with the tenuous cloud of hydrogen atoms in Earth's exosphere.
(Image: © NASA/Goddard Space Flight Center)

A spacecraft designed to scan the edge of the solar system has turned its gaze back toward Earth, taking an unprecedented look at the solar wind's head-on collision with the planet's magnetic field.

NASA's Interstellar Boundary Explorer, known as IBEX, has recorded the first-ever look of the solar wind - the million-miles-per-hour stream of charged particles from the sun - crashing headlong into Earth's magnetosphere, space agency officials said in a statement. The solar wind could strip away the planet's atmosphere if the magnetosphere, a magnetic bubble surrounding the planet, didn't help deflect it.

The spacecraft's observations show the solar wind piling up in front of the magnetopause - the boundary between Earth's magnetosphere and space, about 35,000 miles (56,327 km) toward the sun. The interaction is invisible to the human eye, but not to IBEX's sensors.

The observations are expected to yield new insights into how the magnetosphere "force field" works, as well as how thin the uppermost layer of Earth's atmosphere, called the exosphere, actually is, researchers said.

"Where the interaction is strongest, there are only about eight hydrogen atoms per cubic centimeter," study leader Stephen A. Fuselier of Lockheed Martin Space Systems said in a statement. The research is detailed in the July 8 issue of the journal Geophysical Research Letters.

Such observations are a departure for IBEX, which is typically used to look outward. The spacecraft launched in October 2008 to map out the boundary between the solar system and interstellar space. It does so from an orbit that takes eight days to circle the Earth.

Last year, researchers announced that the probe had detected a mysterious ribbon on the edge of the solar system that scientists now think is a reflection of the solar wind.

IBEX also has been responsible for other firsts.

For example, it has directly collected hydrogen and oxygen from the interstellar medium.. And IBEX made the first observations of very fast hydrogen atoms coming from the moon, following decades of speculation about their existence. Many hydrogen atoms become embedded in the moon's surface, so such measurements shed light on the "recycling processes" undergone by particles throughout the solar system.

IBEX uses the most sensitive neutral atom detectors ever flown in space and is building upon measurements made by the two Voyager spacecraft. Voyager 1 and 2, launched in 1977, have reached the interstellar boundary region, but their view is much narrower and more constrained.

"It will take a while before the community comes to a consensus about what the IBEX data really mean," said IBEX principal investigator David McComas, assistant vice president at Southwest Research Institute in San Antonio. "Yet we've already learned much, much more about our place in the solar system."