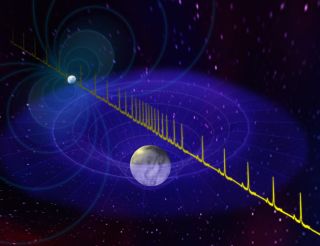 This graphic shows how pulses from neutron star (rear) are slowed as they pass near foreground white dwarf. This effect allowed astronomers to measure masses of the system and discover the most massive neutron star to date: PSR J1614-2230 about 3,000 light-years from Earth.
(Image: © Bill Saxton, NRAO/AUI/NSF)

Astronomershave found the most massive neutron star yet measured ? one nearly twice themass of our sun. The discovery indicates that, as their name suggests, these stellarremnants really are made mostly of neutrons, as opposed to more exoticparticles.

Neutronstars are fast-spinning remnants left behind in the aftermath ofsupernovas: huge star explosions where protons are crushed together withelectrons to form neutrons. They are typically small, with diameters of about12 miles (19.3 km) or so, but yet so massive they weigh as much as the sun.

"We didn't really know for sure that neutron stars could getquite this massive until we made this measurement ? it was very surprising andexciting," researcher Paul Demorest, an astronomer at the National RadioAstronomy Observatory, told SPACE.com. "The typical thinking was that mostneutron stars clustered pretty tightly around 1.4 solar masses."

Whilestars come in all sizes and can be dozens or hundreds of times the mass of thesun, neutron stars ? because of their properties ? are unique in thatastronomers have long-thought they were limited to masses around 1.4 times solarmasses.

The record-breaking neutron star is called PSR J1614-2230 and isroughly 3,000 light-years from Earth.

What's it really made of?

Neutronstars are made of ultra-dense matter. A chunk of a neutron star the size of asugar cube can weigh about 100 million tons. This extraordinary density makes neutronstars ideal ways to study the densest and exotic states of matter known tophysics that require far too much energy to replicate in stable form here onEarth.

Whileastronomers have long thought that neutron stars are composed solely ofneutrons, some scientists have recently proposed they might also contain moreexotic subatomic particles as well, such as hyperons and kaon condensates,which possess so-called "strangequarks."

Althoughquarks ? the building blocks of protons and neutrons ? are generally thought toalways be confined atomic nuclei in nature, some researchers had also suggestedneutron stars might contain unbound "free quarks."

Tolearn more about neutron stars, investigators focused on PSR J1614-2230, whichis a millisecond pulsar, a neutron star that emits radio pulses and spinscompletely around roughly every three thousandths of a second. Millisecondpulsars spin very reliably, serving as verystable timekeepers ? changes of even a few millionths of a second can bedetected.

Thispulsar is a binary, in mutual orbit with a companion star, a white dwarf.

Todetermine the neutron star's mass, researchers measured a delay in the traveltime of its radio pulses resulting from them getting distorted by the companionstar's gravitational field. This effect, called the Shapiro delay, variessystematically as the paired stars orbit each other, and precise analysis of itallowed scientists to determine the white dwarf's mass.

Sincethe investigators know the orbital characteristics of the binary system as awhole, knowing the companion star's mass enabled them to calculate the pulsar'smass as well.

Thepaired stars are in an orbit almost perfectly edge-on from Earth, making thevariation in the distortions of the radio pulses more pronounced, researcherssaid. Also, the white dwarf is unusually massive for a star of its type,meaning its gravitational field had an especially profound effect on thepulses.

Thescientists narrowed the pulsar's mass to 1.97 times the mass of the sun, giveor take 0.04 solar masses.

Thishigh mass rules out nearly all currently proposed models for neutron starmatter that involve exotic particles such as hyperons and kaon condensates,Demorest explained. Those exotic particles are more essentially squishier thanneutrons, and if a neutron star that massive did possess those particles, it could squeeze together so much that it would collapseinto a black hole.

Althoughthe matter in the neutron stars could be made of quark matter, it could onlysupport a star this massive if they strongly interact with each other as theydo in normal atomic nuclei and not if they were free, added researcher FeryalOzel of the University of Arizona.

Thesenew findings could also shed light on the origins of gamma ray bursts, the mostpowerful explosions in the universe. A leading explanation for the cause of onetype of gamma-rayburst ? the "short-duration" bursts ? is that they are caused bycolliding neutron stars. The fact that neutron stars can be as massive as PSRJ1614-2230 hints these collisions would be powerful enough to generate thesebursts.

"Pulsarsin general give us a great opportunity to study exotic physics, and this systemis a fantastic laboratory sitting out there, giving us valuable informationwith wide-ranging implications," Ransom said. "It is amazing to methat one simple number ? the mass of this neutron star ? can tell us so muchabout so many different aspects of physics and astronomy."

Theresearch is detailed in the Oct. 28 issue of the journal Nature. They will alsodetail their calculations regarding neutron stars and free quarks inAstrophysical Journal Letters.