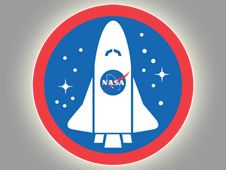 NASA astronaut Doug Wheelock, the space station commander, became the first person to use Foursquare, a mobile social networking application, in space after "checking in" from the International Space Station on Oct. 22. Wheelock even unlocked a NASA Explorer badge when he checked in from space.
(Image: © Foursquare)

Good luck trying to oust this out-of-this-world mayor on Foursquare.

NASA astronaut Doug Wheelock, the space station commander,became the first person to use Foursquare, a mobile social networkingapplication, in space today (Oct. 22) after "checking in" from theInternational Space Station.

Foursquare is an application that allows users to"check in" to venues wherever they go, and earn rewards (in the formof Foursquarebadges) along the way for activities and experiences. The service can alsobe used to find nearby friends and get helpful tips about places.

If a user checks in somewhere more times than anyone else,he or she becomes the "mayor" of the venue. It can even getcompetitive, because current mayors can be "ousted" from their positionsif someone else makes more visits.

Wheelock's check-in from thespace station unlocked the new NASA Explorer badge. The accompanyingmessage read: "You are now 220 miles above Earth traveling at 17,500 mphand unlocked the NASA Explorer Badge! Show this badge and get a free scoop of astronautice cream."

The event helped kick off a new NASA partnership with Foursquareto connect its users to the space agency, enabling them to explore destinationsbeyond our home planet and throughout the universe.

"Check-ins from around the world have been cool, butthis blew my mind!" Dennis Crowley, chief executive officer and co-founderof Foursquare, said in a statement. "We're psyched to partner with NASA tohelp users explore the space program and the universe."

Wheelock launched on a Russian Soyuz rocket to the spacestation on June 15. He assumed command of the orbiting laboratory and itsExpedition 25 crew on Sept. 22. During his time in space, he and fellow NASAastronaut Tracy Caldwell Dyson conducted three spacewalks to replace a faultycooling pump module on the station's truss.

When Wheelock completes his stay aboard the space station andreturns to Earth at the end of November, the NASA Explorer badge will beavailable for regular Foursquare users to earn, NASA officials said.

The partnership between NASA and Foursquare also includesthe launch of a customizable NASA homepage, where the agency will provide officialtips and information about the nation's space program in locations throughoutthe country.

"Through this partnership, when Foursquare users checkin to NASA sites, they will discover interesting things that happen at each ofthe agency's locations," NASA officials said.

This is not the first time that NASA has embracedsocial media. NASA centers, specific missions, and most of the agency'sastronauts maintain active Twitter accounts, where they post updates, pictures andannouncements.

In January of this year, astronauts on the InternationalSpace Station were also equipped with live Internet connection for the firsttime ? enabling crewmembers to post Twitterupdates live from space.?

NASA has also partnered with Gowalla, a mobile and webservice that aims to inspire discovery by connecting people with the placesaround them.

Gowalla users can find and collect four NASA-related virtualitems by checking in to NASA visitor centers, agency-related locations, or oneof the more than 400 museums, science centers, planetariums, observatories,parks, nature centers, zoos and aquariums that are part of NASA's MuseumAlliance.