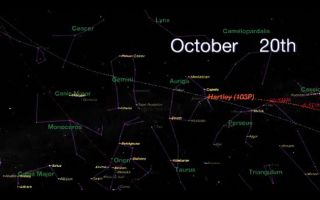 This sky map shows where to look for Comet Hartley 2 on Oct. 20, 2010, when it makes its closest approach to Earth. This still is taken from a video detailing the comet's night sky path in October.
(Image: © Starry Night)

Typicallyduring the course of a year about a dozen comets will come within therange ofamateur telescopes. Most quietly come and go with little fanfare, butduringthe upcoming weeks one rather small comet will be making an unusuallyclose approachto the Earth.

OnOct. 20, Comet Hartley 2 will pass just over 11 million miles (18million km)from Earth. During October it should be easily visible in smalltelescopes,binoculars and ? from sites with dark enough skies ? even with thenaked eye.

Becauseof their low mass, comet nuclei do not becomespherical under their own gravity as larger bodies in space do, andthus haveirregular shapes. They are often popularly described as "dirtysnowballs,"though recent observations have revealed dry dusty or rocky surfaces,suggesting that the ices are hidden beneath the crust.

Inaddition to its close pass of Earth, CometHartley 2 will be visited in early November by the DeepImpact spacecraft,which already had a previous encounter with Comet Tempel 1 in 2005.

Atthe time Hartley discovered it, the newfound comet was an exceedinglyfaintobject, with just a hint of a tail; it was about 25,000 times dimmerthan thefaintest stars that can be seen with the naked eye. After furtherimages wereobtained over the next several days, Hartley announced his discovery totheCentral Bureau for Astronomical Telegrams in Cambridge, Mass.

Thiswas Hartley?s second discovery of a comet and so was designated asCometHartley 2. Orbital calculations by Brian Marsden of the SmithsonianAstrophysical Observatory in Cambridge, Mass., indicated that Hartley 2had alreadymade its closest approach to the sun nine months earlier and that atthat time itwas too close to the sun's glare to have been detected.

Marsdenalso calculated that the comet made a close approach to Jupiter during1982.The comet takes roughly 6 1/2 years to circle the sun and it has sincebeenobserved again in 1991, 1997 and 2004.

Thisfall, Comet Hartley 2 will again be passing through the inner solarsystem,reaching its closest point to the sun (called perihelion) on Oct. 28 atadistance of 98.4 million miles (158.4 million km).

Andwhile en route to the sun, it will also make a very close approach totheEarth. In fact, at 3 p.m. ET on Oct. 20, the comet will be at itsclosest pointto our planet at a distance of 11.2 million miles (18 million km).

It'squite unusual for any comet to approach this close to Earth. Such anevent onlyhappens on average perhaps three or four times a century.

Ifthis comet were reasonably large, it would likely put on a veryspectacularshow around the time of its closest approach.

Halley'sComet passed a similar distance from Earth in the year 1066and wasdescribed in ancient records as appearing "like a moon" as well asbeing depicted in the Bayeux Tapestry, a long embroidered piece ofcloth thatdepicts the Norman conquest of England.

Unfortunately,Hartley 2 is a very small and intrinsically faint comet. Observationsby the Spitzer Space Telescopein August 2008 showed that the comet's nucleus has a diameter of just0.7 miles(1.1 km). Its nucleus isonly about one tenth the size of Halley's Comet and perhaps only onethirtieththat of Comet Hale-Bopp.

Nonetheless,Hartley 2 will come close enough to us to become dimly visible to theunaidedeye during early to mid October.

Currentexpectation is that the comet will reach a peak magnitude of perhaps4.4 at thetime of its closest approach. However, around that time the comet willprobablyappear very large in overall apparent size, perhaps similar to theapparentsize of the full moon.

Asa result, much of the comet's brightness will be "spread out" overthat area of the sky. So visually to the eye under a dark sky it willappearnot as a sharp star-like image, but more like a dim, circular patch oflight.

Binocularsor a small low-powertelescope will provide a somewhat more pleasing view: a dim,circular,grayish-blue ball of light with a star-like condensation (the nucleus)at thecenter.

Ifthe comet develops a tail of any kind, it likely will be of the gaseousvariety? very thin, faint and narrow, giving the comet the appearance of whatcometexpert John Bortle likens to "an apple on a stick."

AsOctober begins, Comet Hartley 2 will be in the constellation ofCassiopeia,which at dusk will be positioned halfway up in the northeast sky;through Oct.5 it will be passing below and to the right of the famous "W"-shapedformation composed of five bright stars.

Thecomet then moves into the constellation of Perseus on Oct. 6 and beforedawn onthe morning of Oct. 8, it will be situated only 0.7 degrees below andto theright of the famous Double Star Cluster. The cluster supposedly marksthe swordhandle of Perseus and is often touted as one of the most impressivestarclusters in the entire sky.

BetweenOct. 15 and 20, within about a half hour of 4:00 a.m. local time, thecometwill be passing almost directly overhead.

Butone problem that will become an increasing factor during the middle ofOctoberis the waxing moon that will light up the sky during the first part ofthenight and will seriously interfere with observations of the comet.

Themoon will set later in the night leaving the sky dark during thepredawn hours,but as it approaches its full phase on Oct. 22, the amount of timebetweenmoonset and the first light of dawn will get noticeably shorter.

Forexample: From mid-northern latitudes on Oct. 16, moonset is at 12:56a.m. localtime and dawn breaks at 5:37 a.m., which means the sky will be dark andmoonless for 4 hours and 41 minutes.

Justfour mornings later, however, the nearly full moon will set at 4:51a.m. withmorning twilight beginning at 5:41 a.m., leaving just a scant 50minutes ofdark sky for comet viewing. On Oct. 21, the moon will not set until5:51 a.m.or 9 minutes after dawn.

Evenafter Hartley 2 makes its closest approach to Earth, it will becomepart ofanother close approach of a different kind. On Sept. 5, more than fiveyearsafter its July 4, 2005, rendezvous with Comet Tempel 1, NASA's DeepImpact spacecraft will begin beaming down the first of morethan 64,000images it's expected to take of Comet Hartley 2.

Thespacecraft will continue imaging Hartley 2 during and after its closestapproach on Nov. 4, when it will pass to within 430 miles (692 km) ofthecomet's nucleus, providing an extended look at the comet.

Theflyby of Comet Hartley 2 is the second leg of the Deep Impactspacecraft'stwo-part extended mission known as EPOXI. During the flyby a scienceteam fromthe University of Maryland will study the comet using all three of thespacecraft's instruments ? two telescopes with digital color camerasand aninfrared spectrometer.

Joe Raoserves as an instructor and guest lecturer at New York's HaydenPlanetarium. Hewrites about astronomy for The New York Times and other publications,and he isalso an on-camera meteorologist for News 12 Westchester, New York.